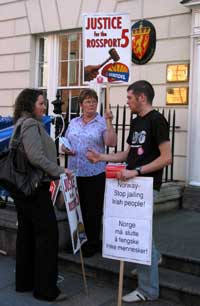 Protestors at the Norwegian embassy

As the Shell-to-Sea campaign continues to grow in support all over Ireland, it has emerged that the company doing a safety review of the Corrib gas pipeline is linked to another company that has been fined in connection with an explosion that killed four people in Scotland.

Minister for Communications Marine and Natural Resources Noel Dempsey recently announced that Advantica had been selected to carry out the safety review. Advantica has been described as a "wholly owned but independent consultancy subsidiary of National Grid Transco, UK".

Last week Transco was fined £15 million or €22 million after being convicted on a charge arising from an explosion that killed Andrew and Janette Findlay and their children Stacey (13) and Daryl (11) in Larkhall, South Lanarkshire in December 1999.

Meanwhile, the Celtic League has expressed support for the immediate release of the Rossport Five. Delegates attending the League's AGM on the Isle of Skye passed a motion supporting the five Mayo men.

In a packed meeting at the ATGWU headquarters in Dublin on Thursday 25 August, the campaign agreed unanimously on a common protest strategy which involves further picketing of Shell and Statoil stations on a co-ordinated basis. The protests will culminate with a national rally in Dublin on 1 October. Martin Murray, the organiser of the Dublin branch of Shell-to-Sea, called on supporters throughout the country to take part. The ATGWU has also pledged their full support to this campaign and likewise have been calling for the release of the Rossport 5. Mick O'Reilly, the secretary of the ATGWU, has vowed to lobby the Irish Council of Trade Unions (ICTU) for their backing.

Details of the national rally signalled on 1 October were given at the meeting. It is expected that this will be a major rally in support of the Shell-to-Sea campaign, as well as calling for the release of the Rossport 5. It is aimed at bringing the campaign onto a higher plane of publicity. It is hoped that activists from around the country will travel and allow this event to have a major impact. The National Rally will be followed by a fundraising concert in the Ambassador Theatre on the following day.

All of Sinn Féin's 14 councillors signed a letter expressing unequivocal support for the Rossport 5 and the demands of the Shell-to-Sea campaign and this was sent to the Rossport 5 in Cloverhill Prison. The letter called for the release of the five men and for Shell E&P to cease all of their operations in Erris pending a proper, independent investigation into the health and safety implications of the pipeline for residents in Rossport and surrounding areas. In relation to the issue of the ownership of Ireland's natural resources the letter said: "We call on the Irish Government to revisit the issue of the licensing of our natural resources to ensure that the Irish people will benefit from future finds of gas or oil off our coast."

On Friday 26 August a day of action took place at about 30 Statoil service station across Dublin city. Stations were picketed at one-hour intervals from 5-7pm. The pickets were generally well observed and passing members of the public, motorists and pedestrians, showed support and gave encouragement to the protestors. Many were curious and interested in finding out more about the issue. Such citywide protests against Statoil and Shell service stations have been taking place at regular intervals in the last few weeks.

A protest was held in Derry on Saturday 27 August. Derry Sinn Féin Councillor Kevin Campbell called for people in Derry to come out and show their support. He said: "It is a disgrace that Irishmen are being imprisoned for opposing multinational companies building on their own land."

On the same day in Armagh City a similar protest took place. Sinn Féin MLA Pat O'Rawe said the protest was organised to raise the issue in Armagh, to call for the release of the men and demand the implementation of the Shell-to-Sea campaign. Cllr Noel Sheridan added that further protests will take place over the coming weeks and asked people in the area to support the campaign.

Members of Sinn Féin and Ógra Shinn Féin in Dundalk held a protest at the Market Square last Saturday. They called for their release and for the protection of Ireland's natural resources. Ógra Organiser Eugene Garvey said: "This is the second protest held in Dundalk by Sinn Féin in support of the Rossport 5. The reception from the public was again very good with more people becoming aware of the issues surrounding this scandal."

A series of "flying columns" to picket Shell and Statoil stations has been organised by Wicklow Sinn Féin for the nationwide day of protest against the continued, unjust imprisonment of the Rossport 5. Last Saturday residents in Bray were canvassed on the main street and asked to sign petitions. "Lightning pickets" have been organised to take place at selected Shell and Statoil stations in order to drive home the point that these big oil companies are responsible for the men's continued imprisonment. Sinn Féin Councillor John Brady said "the continued incarceration of these men, who want nothing more than to keep safe their homes and families, is a national scandal".

On Tuesday 30 August protestors picketed the Norwegian Embassy on Dublin's Molesworth Street, near Leinster House. Protestors carried placards in English and Norwegian. The Rossport issue has become a media story in Norway and the objective of this particular protest is to keep the issue on the media agenda there. Numerous journalists observed Tuesday's protest.

On Saturday 10 September, the blockade of the onshore Clontarf Shell depot will commence at 8am near Dublin's Clontarf DART Station. This facility is the main entry point for Shell Oil into Ireland. This is expected to be a day-long protest.

We the undersigned request that the Irish Government release the Rossport 5 now. We also demand that Shell cease all operations in Erris, both onshore and offshore, pending a full investigation into the Corrib gas project as a whole, particularly in terms of health and safety of the local residents in Rossport and in the surrounding areas, and that it be agreed to refine the gas at sea. The criminalisation of Irish citizens should stop now. This project must not proceed as currently proposed. It will set a dangerous precedent.

"We declare that right of the people of Ireland, and to the unfettered control of Irish destinies, to be sovereign and indefeasible. The long usurpation of that right by a foreign people and government has not extinguished the right, nor can it ever be extinguished except by the destruction of the Irish people". 1916 Proclamation.

We call on the Irish Government to revisit the issue of the licensing of our natural resources to ensure that the Irish people will benefit from future finds of gas or oil off our coast.

Blockade of Clontarf Shell Depot, starting at 8am in the morning. Clontarf Dart Station