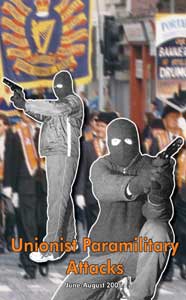 The dossier, published on 18 August, details attacks carried out by unionist paramilitary gangs in the period since June of this year.

Although by no means comprehensive, due to the fact that so many such attacks go unreported, it still offers a chilling picture of orchestrated sectarian intimidation, particularly in areas where there is a vulnerable nationalist minority.

The report shows very graphically where the threat to peace in Ireland emanates from. It raises major questions about the unionist political leadership and the Orange Order. The Ulster Unionists, DUP and Orange Order all share forums and commissions with the leaderships of the UVF and UDA and have major influence with them. Sinn Féin has pointed out that people have a right to know what these parties and the Orange Order are doing to end this violent campaign against the nationalist community.

Furthermore the question must be asked as to what the Dublin Government is doing in terms of bringing pressure to bear with the British Government and the unionist political leadership to end this onslaught.

We should make it clear that force means death and fighting, and whoever gets in our way, whether republicans or those sent by the British Government, there would be killings.

There is in particular amongst the Catholic community now, increasing fear of paramilitary activities. And in a perverse way, this is something which may be helpful because they are now beginning to appreciate more clearly the fear that has existed within the Protestant community for the past 20 years.

My men are ready to be recruited under the crown to destroy the vermin of the IRA. But if they refuse to recruit them, then we will have no other decision to make but to destroy the IRA ourselves!... We will exterminate the IRA!

If the British Government force us down the road to a united Ireland we will fight to the death... This could come to hand to hand fighting in every street in Northern Ireland. We are on the verge of civil war... We are asking people to be ready for the worst and I will lead them.

Taxpayers money would be better spent on an incinerator and burning the whole lot of them. The priests should be thrown in and burned as well.

Ulster Resistance is not for the faint or half hearted and we will use all means which are deemed necessary to defeat the Agreement.

The Orange Order is a very broad church and it's not my responsibility to say to people they can't be members of various organisations.

They are on our side. We might not agree with everything they do but they have been helpful to brethren in North and West Belfast, and continued to defend Orange Order refusal to talk to residents.

The following dossier details attacks carried out by unionist paramilitary gangs in the period since June 2005 (as reported in the media) Although by no means comprehensive, due to the fact that so many attacks go unreported it offers a chilling picture of orchestrated sectarian intimidation, particularly in areas where there is a vulnerable nationalist minority

Pipe Bombs thrown at the homes of migrant workers in racist attack in Loughgall.

Car set on fire in racist attack in Loughgall.

7 June - Catholic homes and a car were petrol bombed in Coleraine.

10 June - 56-year-old woman attacked in her Ballymoney home and given 24 hours to leave.

Four masked men attack a man at his home in Ballyree Drive, Bangor.

10 July - Gun attack linked to the LVF on a home in the Silverstream Road area of North Belfast.

Man forced to flee home in Woodvale Pass as masked and armed gang burst in.

Man shot and seriously injured on the Crumlin Road in an attacked linked to the LVF.

Catholic woman forced to flee her Ahoghill home after 50 years due to attacks.

Business premises on Cregagh Road burned down in arson attack.

UDA firing party appear at bonfire in the Westlands area.

Attempt to abduct nationalist in Portstewart.

15 July - Sinn Féin member in Coleraine told of threat to his life.

Catholic homes in the Short Strand once again come under attack.

Several nationalists in Dunloy, County Antrim visited by the PSNI and warned that they are under threat from unionist paramilitaries.

Device left on Dublin rail line to disrupt travel to the GAA Ulster Final in Dublin.

Leading republican Martin Meehan advised by the PSNI that his life is under threat from unionist paramilitaries.

Ten shots fired at a house in Station Road, Newtownabby.

A woman and two children escape after petrol-bomb attack on their home in Silverstream Gardens.

31 July - UDA linked to the shooting of a 38-year-old in the Westland area.

Shots fired into a house in Randalstown, County Antrim.

Masked loyalist protestors are joined by DUP politicians for illegal protest in Ballymena.

15-year-old Thomas Devlin murdered in North Belfast attack, attributed in the media to the UVF.

12 August - Catholic homes in the Waterside area of Derry attacked.

15-year-old tied to a lamp post and covered in paint on the Donegal Road.