Upsurge in support for 16 Moore Street 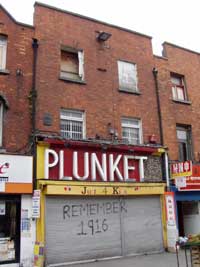 The last headquarters of the Provisional Government in 1916 on Moore Street in Dublin's city centre has been inspected by Dublin City Council architects with a view to documenting it's architectural and historic importance and identifying work that needs to be carried out. This follows the recent upsurge of public support for the campaign to save the building.

The campaign to have the building preserved has been spearheaded by An Taisce with the support of historians, members of the public and some political representatives, including Sinn Féin.

Sinn Féin's Dublin Environment spokesperson and Chairperson of the City Council's Economic Development & Planning Committee, Councillor Daithí Doolan, welcomed news of the recent inspection as a positive step. "I have stressed to the planners the urgency in completing the report so Dublin City Council can have the building listed and any repairs carried out as a matter of urgency. This important report should be ready within six weeks and should pave the way for the building being listed and restored as an historic site. While immediate repairs can be carried out sooner."

Doolan also called on Fianna Fáil Minister for the Environment Dick Roche to "play his part and declare the site a National Monument".