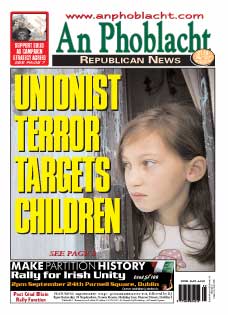 While unionist politicians have publicly endorsed the newly-launched 'Love' campaign the effects of the unionist hate campaign are felt being felt nationalist children in various parts of the Six Counties.

Nine-year-old Megan Meredity sat on the back step of her North Belfast home as the media photographed the latest in a series of sectarian attacks on nationalist homes in the Whitewell Road area. The double windows of the patio doors are covered in pale blue paint from the previous night's attack.

Photographed in her pyjamas and slippers, Megan leans her cheek onto a hand, her elbow resting on one knee. Her face is neither shocked nor angry. It is much worse than that. The expression is one of resignation and resentment. Unionist violence is nothing new around here.

A few months earlier a number of nationalist families were lucky to escape with their lives when heating oil tanks were set alight. The burning fuel poured from the tanks setting everything in its path on fire. Fleeing families were forced to run through the flames to escape.

Earlier in the week a three-month-old baby, Lorcan Grew, had been splattered with a paint bomb and cut by flying glass when unionist paramilitaries targeted his home in Cliftondeane Crescent. A petrol bomb was also thrown and exploded in the doorway of the house while other members of the five-man loyalist gang lobbed paint bombs at neighbours houses during the attack on Wednesday 25 August.

The mother, Catherine Magee had pleaded with the gang not to throw the devices as her one-year-old son and a six-year-old friend played in the front garden. The baby had been sleeping in his pram inside the house when the windows were shattered and paint thrown into the front room by the gang. All three children were treated for cuts.

The nationalist-owned Motte 'n' Bailey bar in Dunmurry, South Belfast was pelted with paints bombs on Wednesday 24 August in what the owner described as an, "obviously sectarian attack". The bar has been the focus of an eight-year campaign orchestrated by UDA gangs which has seen the bar fire bombed three times and paint bombed on numerous occasions. Customers have regularly had to run the gauntlet of assaults by loyalists when leaving the premises.

News that three nationalist men were forced out of their South Belfast homes came to light on Wednesday 31 August. The three men left their homes at the Church Road area off the Saintfield Road after loyalist threats and after loyalist gangs attacked a number of nationalist-owned homes. Both the UDA and the UVF are thought to be behind the intimidation.

Petrol bombers, operating from the loyalist Glenbryn Estate, lobbed four devices across the 'peace line' at the home of nationalist pensioner George Williams on Alliance Avenue last Thursday 25 August. Scorch marks were left on the back of Williams's house as well as that of a neighbour.

In a previous attack, at the height of the Holy Cross dispute three years ago, a blast bomb ignited an oil tank at the back of Williams neighbour's house.

The Mosside home of a 22-year-old nationalist man suffered extensive damage in a UDA arson attack last Wednesday 24 August. The intensity of the heat melted a television set, destroyed kitchen fittings and work tops as well as melting light fittings.

Mosside, a small loyalist area close the mainly nationalist town of Ballycastle, is the base from which the UDA's North Antrim Brigadier has launched numerous attacks on nationalists throughout North Antrim over the past number of years. Sectarian graffiti was also daubed on the wall of the Castle Park home.

The canteen and library of St Mary's Primary school in the Harryville area of Ballymena suffered an estimated £1,000 damage when it was hit by five petrol bombs in an attack carried out by unionist paramilitaries some time between 3pm on Monday 29 and 9am on Tuesday 30 August.

Extensive smoke damage was caused in this the latest attack on the school just days before pupils were due to return after the summer holidays.

During the 1996 Harryville dispute the school was attacked five times, including one bombing.

And unionist paramilitaries attempted to burn down another Catholic primary school in Ballymena on Tuesday. St Louis Primary School on the Cullybackey Road was targeted at 11pm.

The attackers forced open a window and pored in a flammable liquid which they set alight. One classroom was extensively damaged and ten others sustained smoke damage.

A house in Bleach Green Avenue in Newtownabbey, on the outskirts of North Belfast was struck by paint bombs which caused damage to the window and wall of the home.

Nationalist residents have been targeted by unionist gangs over the past number of weeks.