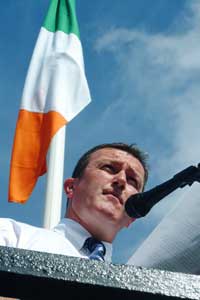 Republicans from throughout Ireland gathered in glorious sunshine last Sunday at Sallins, County Kildare, for the annual Wolfe Tone commemoration at nearby Bodenstown.

Sinn Féin's first Údarás member, Donegal's Gráinne Mhic Géidigh, chaired the proceedings. The day's main speaker was recently-elected Sinn Féin MP for Newry/Armagh, Conor Murphy. He said there should be no doubt that Sinn Féin's primary aim is the unity and independence of Ireland as a sovereign state.

"Earlier this year, Sinn Féin launched a campaign calling for the publication of a Green Paper on Irish unity by the Irish Government. This call was made not only because the primary objective of Sinn Féin is Irish unity but because Fianna Fáil, Fine Gael, the Labour Party and the SDLP all say they are in favour of it.

"If that is the case then surely the logical next step is for all of us to sit down and set out a strategy to bring this about. So to members of Fianna Fail, SDLP, Fine Gael and Labour I say, join with us in planning for a new all-Ireland republic. I call on you to stand up to those, some of whom are in the Irish Government, who believe that Ireland stops at the border.

While Irish re-unification is our ultimate objective we are not prepared to wait, nor should we have to, for basic rights and entitlements — for decent hospitals and schools, for decent healthcare and housing. For a fair share of the wealth which exists on our island. If the British Direct Rule Ministers in the Six Counties and the Fianna Fáil/Progressive Democrat coalition government have one thing in common — it is that they have both failed to deliver for the people of this island. Instead, despite economic growth, we have a widening gap between rich and poor, ongoing attempts to sell off public services, overcrowding in our schools, hospital waiting lists and tax breaks for the rich.

Sinn Féin stands as a real alternative to all of that. We believe that economic growth should be used to the benefit of all of us living on the island. We want equality to be a cornerstone of Irish society. We want to see investment in health and education, rights for the disabled, an end to poverty. We want to see government priorities change from investing in the rich to investing in the people."

Murphy said fear of the electorate was all too apparent in the Irish Government's decision to postpone the referendum on the EU Constitution to allow for what they call a 'period of reflection': "This of course is complete nonsense. They don't want a proper debate because that is what happened in France and the Netherlands.

"What they are really hoping is that the electorate forget that the people of France and the Netherlands came out in record numbers and voted against the Constitution. They are very naive if they think that will happen.

"It is worth noting that the French and Dutch did not rush to Brussels to apologise for their country men and women 'making a terrible mistake' as happened here after the defeat of the Nice Treaty referendum.

'I am calling on the Irish government to treat the electorate in this country with the same respect and hold the EU Constitution referendum this autumn. Let's have the debate now. Let the people decide."

Drawing attention to the fact that this year marks the centenary of the foundation of Sinn Féin, Murphy urged people to attend the Céad Bliain national rally in Dublin on Saturday 24 September. He said the 100th anniversary must be a year of education, of re-popularising the republican struggle, a year of analysing and learning the lessons of a century in struggle. There was a need also to start to prepare to mark the 25th Anniversary of the 1981 Hunger Strike next year and the 100th anniversary of the 1916 Rising.

"As part of an overall and necessary regeneration much work has also gone on over the past year in restructuring An Phoblacht. The people who keep the paper going deserve our support and we intend to relaunch the paper in the coming months and I am appealing to the wider republican community to embrace and support this important republican project.

Addressing the immediate political situation, Murphy said: "On 6 April, Gerry Adams made a direct appeal to the men and women Volunteers of the IRA to embrace purely political and democratic activity.

The IRA leadership responded to this appeal by initiating an internal debate and we await the conclusion of those discussions. I have no intention today of commenting on this internal discussion. That is a matter for the IRA and, as Gerry Adams has repeatedly said, that organisation should be given the space to thoroughly debate these matters.

Of course, it is clear that a positive response from the IRA would have an immediate and enormous impact on the political situation. It would restart the faltering Peace Process; remove from unionists their excuse for non-engagement and it would put enormous pressure on the DUP to come on board the peace process for the first time.

Of course, the DUP may choose not to do so. Their current public position gives little cause for optimism. Their record of sectarian bigotry and intolerance, their offensive and provocative language, their association with loyalist paramilitaries and Ulster Resistance in particular, their 'Smash Sinn Féin Campaign' which accompanied the loyalist onslaught on our party members are all well documented. A campaign which saw Councillors Eddie Fullerton, John Davey, and Bernard O'Hagan, and Sheena Campbell and many other members of this party and family members and friends killed by unionist paramilitaries working hand in glove with the crown forces.

But despite all of this, Sinn Féin is prepared to do business with the DUP because they have an electoral mandate; just as they must do business with Sinn Féin because we have an electoral mandate; because we are the largest nationalist party in the north; the largest pro-Agreement party in the North and the third largest party on the island of Ireland.

At some point the DUP will have to enter the world of real politics. They will have to learn that there is no alternative to sharing power with Irish republicans; that there is no alterative to the all-Ireland architecture of the Good Friday Agreement and that their brand of politics, based on crude sectarianism, bigotry and intolerance, is a political cul-de-sac. I am firmly convinced that it is not a matter of if the DUP do a deal but when. And while the DUP comes to terms with these political realities, the two governments must push ahead with the agenda of change set out in the Agreement. They have been mandated to do so by the people of Ireland.

Commenting on attempts by the Orange Order to stir up tensions during the Marching Season, Murphy said: "Critically, as we face into the marching season, there must be no repeat of the decisions made by the British Government last year which led to near disaster in Ardoyne. We have seen on Friday night how eager the PSNI are to provoke confrontation with nationalist residents. This issue is the very immediate test which the new British Secretary of State, Peter Hain, faces in the next few weeks.

Over recent weeks it seems that the Orange Order has taken a decision to increase tensions around the marching issue this summer. The only purpose of this is to poison further an already strained political atmosphere. They have filed for parades along a number of contentious routes and continue to refuse to engage with local communities.

It is very obvious that a difficult and contentious marching season will not be helpful to efforts to make political progress, whereas a peaceful and quiet summer would have the opposite effect. The Orange Order know this to be the reality also.

The strategy which they have embarked upon has the potential to undermine efforts to see political progress and many would contend that this is the motivation behind it. At a time when the Sinn Féin leadership and others are trying to put the political process back on track and when the IRA has embarked upon a process of internal consultation it is up to the Orange Order to explain in very clear terms the motivation and purpose of their strategy.

I would also congratulate the discipline and restraint shown by nationalist and republican communities who have had to endure provocative marches their areas year in and year out."

The growing support for Irish republicanism across the island, he said, would continue to be the dynamic for progress towards equality, justice and peace. Sinn Féin stood over its contribution to the Peace Process and in transforming the political situation, not just in the north, but also throughout the island of Ireland: "But there is much more work to be done. That is the challenge facing all of us gathered here today. There will be difficult times ahead. There will, without doubt, be more difficult decisions to be taken. We must rise to the challenges before us. We must take ownership of this process and we must not allow our opponents to distract us from our task in the time ahead.

"Irish republicans have demonstrated time and time again our capacity to overcome adversity and advance our struggle for freedom and justice against enormous odds. We are deadly serious about turning the vision of 1798 into a reality. It will not be easy. The immediate weeks and months ahead present enormous challenges to everyone but especially for Irish republicans. I believe we are up these challenges. I believe we can complete the work of previous generations. I believe we will build the united independent Ireland — the new Ireland — which Wolfe Tone and all of those other generations fought for."

The National Republican Commemoration Committee would like to thank all those who gathered with us on Sunday last in Bodenstown.

We would specifically like to thank all the people who helped organise the event. A big thanks to Brian Dowling for all his invaluable help. Buíochas to Michael Nolan for designing the banners and material. To Pat Bell and the people who provided security and helped co-ordinate proceedings at the graveyard. To Nicola and Paul who gave us great assistance over the weekend. Thanks to Oliver and the lads from Wexford for all their hard work. To the cumainn in the Kildare area for all their help delivering the leaflets. To our chair Gráinne and our speaker Conor for their contributions. Thanks also to Jamie for all his help on the day. A big thank you to all the bands that participated in the commemoration and made it a great day. To Bridget for laying the wreath and last but not least to the veteran republicans who came to join with us in commemorating Wolfe Tone. We hope that we have included everyone. Go raibh maith agaibh go léir.