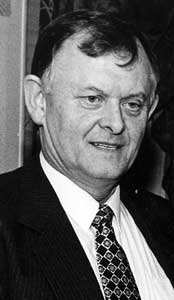 The PSNI say they are pursuing new lines of inquiry after a reconstruction of the LVF killing of GAA official Seán Brown appeared on the British television programme Crimewatch.

According to the PSNI, more than 30 callers contacted them on Wednesday night 15 June after the programme was broadcast.

The television appeal was aimed at gathering new evidence, mainly from the loyalist community, into 61-year-old's kidnap and killing.

An LVF gang brandishing baseball bats attacked Brown as he locked the gates of Wolfe Tone GAC in Bellaghy, County Derry in 1997.

He was then bundled into a car and taken by his killers in a three-car convoy through Toomebridge. Brown's body was later found beside a burnt out car near Randalstown. He had been shot six times.

Well-known LVF member Mark 'Swinger' Fulton, who was found dead in his cell at Maghaberry Jail, was among a number of loyalists quizzed by the RUC about the killing but later released without charge.

Sinn Féin Mid-Ulster MP Martin McGuinness paid tribute to the Brown family, saying they demanded the truth and have pursued the matter with dignity.

The new probe was launched after it was disclosed that the original RUC investigation was riddled with errors.