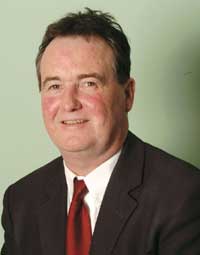 "Pat has been a committed party activist for many years and is currently the Sinn Féin National Organiser," said Adams. "It is a testament to the growth of Sinn Féin in County Monaghan (where we are now the largest party) that Pat was elected to this position with the unanimous support of the membership of Monaghan County Council.

"I have no doubt that Pat will serve the people of Monaghan with distinction and will campaign for better services for all the citizens of that county."

Treanor was elected at the AGM of Monaghan County Council on Monday last. He was proposed by the Sinn Féin group leader on the council, Brian McKenna, and seconded by Brenda McAnespie.

Treanor said that he was eager to see the continued progress of County Monaghan and emphasised the need for the early completion of the county leisure centre and the bypasses of Castleblayney and Monaghan Town.

He also insisted that he would be using the position to exert pressure on the Dublin and London Governments to re-develop the Ulster Canal, which he described as a pivotal all-Ireland project. He also re-affirmed his personal and party support for the Monaghan Community Alliance, which is campaigning for the restoration and development of services of Monaghan General Hospital.

Treanor reiterated his commitment to the all-Ireland agenda and stated that he would use his year of office to enhance this project. He said: "The border has been bad for Ireland and particularly bad for County Monaghan. There is a huge challenge for us to attempt to reverse the impact of years of neglect but it is a challenge that we are up to".

Also on Monday, Sinn Féin Councillor Peter McAleer was elected as An Meara Bhaile (Town Mayor) of Clones. Debbie Moore proposed and Niall Quigley seconded. McAleer is one of Sinn Féin's longest serving councillors, having been first elected in 1985. On his election, he said that one of his first tasks would be to organise a civic reception for the homecoming of Kevin McBride, the heavyweight boxer from Clones who recently put the notorious Mike Tyson into retirement.