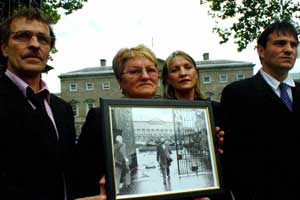 It is now 14 years since loyalist killers shot down Eddie Fullerton in his own home. Eddie was one of more than 20 Sinn Féin members and supporters who were killed by loyalists during that time. In all of those years, those responsible for policing on both sides of the border have shown little or no interest in helping the Fullerton family in their campaign for truth and justice.

There is also mounting evidence of collusion between British forces, Garda members and loyalists in the killing.

In the recently aired documentary Fullerton on TG4, a new witness said that he saw a number of men being picked up by an unmarked RUC car in the early hours of the morning not long after Eddie's murder, only a short distance from where the car used in his murder was found burnt out.

The TG4 documentary also exposed that the witness in question never had an official statement taken but was subjected to an extraordinary and intimidating meeting in an unmarked car with a PSNI officer and a member of the Gardaí.

A number of reputable journalists have alleged that the killers belonged to a UDA/UFF unit led by agents of different agencies of British Military Intelligence, including the notorious Force Research Unit (FRU). Indeed, it has been alleged that at least one of the killers was a British agent.

Three of the Gardaí cited for criminality in the Morris Tribunal over the McBrearty affair were also involved in the so-called investigation into Eddie Fullerton's killing.

Last month, missing correspondence between the Dublin and British Governments in relation to the review of the investigation re-surfaced after Dáil queries from Sinn Féin but despite the clear evidence of collusion and of the abject failure of the Garda investigation, Justice Minister Michael McDowell has continued to refuse to concede the Fullerton family's demand for a public inquiry.

In 1993, Mitchel Mclaughlin got the RUC to admit that the gun used in a sectarian killing of four nationalists in Castlerock, County Derry was the same as that used to kill Eddie Fullerton two years previously. Not once since then has there been any representations from the Department of Justice in Dublin to question any of the loyalists involved in the killing.

On Thursday last, the family met with a cross-party group of TDs and Senators at Leinster House and received a very favourable hearing, with the notable exception of the PDs, who declined to send a representative. The family also had a private meeting with the Mayor of Dublin, Labour's Michael Conaghan. Following the meeting, the Mayor pledged his support for a full public independent inquiry.

On Friday, Eddie's son Albert was back outside Leinster House, where he joined a Sinn Féin protest. Party President Gerry Adams and Sinn Féin's TDs were among the party representatives from across Ireland who stood in solidarity with Albert and their murdered comrade.

Gerry Adams called on the Irish government to support a full, public independent inquiry. He said "this is essential if we are to uncover the truth about the murder and the role the Garda played in the flawed investigation that followed. He also repeated his call for Justice Minister Michael McDowell to resign.

"From the moment of his death, there have been allegations that the murder took place as a result of collusion between loyalists and British Intelligence. And critically, there have also been allegations with regard to the role played by the Gardaí — in the weeks leading up to his death and in the investigation that followed. There was no proper examination of the scene, crucial forensic evidence was never examined and key witnesses were not interviewed.

"It has been known for some time now that three Gardaí — roundly discredited by the Morris Tribunal in recent weeks, were centrally involved in the flawed investigation into Eddie Fullerton's murder. One of them, Detective Garda Noel McMahon, was branded corrupt and a liar by the Tribunal.

"In March 2002, I wrote to the Taoiseach Bertie Ahern asking for the terms of reference of the Morris Tribunal to be extended to include the murder of Eddie Fullerton. This request was dismissed in a letter from the Justice Minister Michael McDowell, who said 'it would not be appropriate to bring an entirely separate matter within the remit of the Inquiry'.

"Minister McDowell's response ignored the fact that the same individuals being investigated by the Morris Tribunal at that time also had huge questions to answer in relation to their role in the investigation into the murder of Eddie Fullerton. It is a disgrace that for 14 years now the government have failed to treat the murder of an elected representative with the seriousness that it deserves. They have failed to support the family in its search for the truth.

"Given the level of corruption that has been exposed among elements of the Gardaí — in Donegal and their link to the Fullerton case and what has already been revealed by the Stevens Inquiry team about collusion, it is essential that there is a full, independent public inquiry into the killing of Eddie Fullerton."

The following poem was written by Eddie's grandchild Ricky, who was just two years old when the murder took place.

And a loving smile

A kiss on the cheek

And then he said goodbye

Or so I've been told

I stand at the grave

And I read the stone

They took him from me

I was two years old

This granddad of mine

They took him from me

They took away our time

I see the pictures

And I have the dreams

Just granddad to me

I know they're not real

They are only dreams

But they are all I have

Of granddad and me

The truth is the most powerful weapon of all

"From the moment my father was murdered, it was apparent that the so-called Garda investigation was seriously flawed," says Albert Fullerton in conversation. "Had they listened to my concerns in 1991, maybe other families in Donegal wouldn't have had to go through what we did at the hands of the Gardaí.

"The fact is that this state allowed the British state to come in and murder my father and ever since they have tried to cover up that collusion.

"It hasn't nee easy over 14 years getting people to believe but I knew if we were patient something would break because the truth is the most powerful weapon of all.

"Myself, my wife and son moved into the house afterwards but for eleven years my mother couldn't face going inside again. It has really taken its toll on me and my family. My mother, who is 66 herself is a remarkable woman though, and she does a lot of work helping elderly people.

"Our position was finally vindicated by the first and second Morris Tribunal reports. Now politicians across the board are more ready to support the campaign and put party politics to one side.

"We have received two votes from Donegal County Council, the last one a unanimous vote just two weeks ago, in support of our demand for an independent public inquiry. That motion will be brought to other councils.

"Michael McDowell has treated us with contempt, not even bothering to respond to our letter seeking a meeting. His department boasts the word equality but he is not fit for the role. His anti-republicanism has been to the fore in his dealings with us.

"Bertie Ahern, in a meeting with Gerry Adams in 1998, spoke of my father in glowing terms, but nothing came of that meeting. We will not rest, however, until the truth of my father's murder is exposed. It is a terrible indictment of a state when it has to be harried by a grieving family to pursue justice when agents from outside the jurisdiction have killed one of its elected representatives."