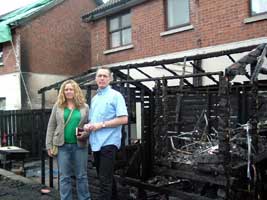 North Belfast was plunged into a weekend of sectarian violence in the aftermath of the Orange Order's 'Tour of the North' last Friday, when the PSNI forced bandsmen and loyalist paramilitary hangers-on past nationalist homes on Belfast's Crumlin Road.

Unionist gangs attacked nationalist homes in North Belfast, assaulted a resident of Short Strand and attempted to wipe out three families by setting fire to oil tanks in Throne Park off the Whitewell Road in the early hours of Monday morning 20 June.

Following loyalist threats that local nationalists would be "burned out", two families, including up to eight children, were lucky to escape alive from the inferno when neighbours raised the alarm.

The attack was carefully planned, as the arsonists ruptured the pipe of one house and let the oil run down into the other two houses, creating "rivers of fire" which engulfed the houses, causing serious damage. The flames from the burning oil quickly spread, melting rubbish bins and damaging cars. One man was taken to hospital suffering from the effects of smoke inhalation.

Father-of-five Peter McCall said his children could have been killed as a garden playhouse they had slept in the night before was destroyed by the blaze.

"The first thing I knew anything was wrong was when I heard neighbours screaming that our house was on fire and I shouted at the children to get out but the back of the house was ablaze, so we had to escape out the front".

McCall said his family would not be returning to their home of the past seven years. "How could you bring children back to this house after something like this? I think of what happened to those Quinn children in Ballymoney and I just thank God we are all alive".

Fire Service assistant divisional officer William Kavanagh said if fire crews hadn't arrived when they did, the damage to the houses could have been much worse. "In one of the houses, the fire got through the sockets into the attic and seriously damaged the roof"

Speaking to An Phoblacht at the scene of the attack, a number of residents criticised the PSNI, who they said were more interested in harassing nationalists than arresting the loyalist attackers. One local man said: "When the PSNI arrived one member jumped from a jeep and asked — 'what's happening here, a barbecue?'" At one point the same PSNI man grabbed a resident by the arm and drew his baton when other residents challenged him over his behaviour.

The cycle of loyalist violence began on Thursday 16 Jun,e with three young nationalists narrowly escaping serious injury when a car they were travelling in was attacked by a group of up to 12 loyalists wielding baseball bats and iron bars at traffic lights near the City Hospital in the Loyalist Village area. The loyalists shouted sectarian slogans before smashing the car windows and beating the occupants around the shoulders.

The loyalist gang attempted to drag the teenagers out of the car but the driver managed to escape the scene. The teenagers received minor injuries but were left shocked by the sectarian attack.

A mother of one of the occupants said the car's central locking system was all that saved them: "My son came into the house dripping in blood. They were very lucky that the car had central locking for God only knows what would have happened to the boys if they had of been dragged out of the car. It is unthinkable that sectarian attacks can happen in broad daylight on a busy main road".

In the early hours of Friday morning 17 June, a 72-year-old pensioner, whose two sons were killed by loyalist paramilitaries, had her house attacked by loyalists who threw a large garden ornament through the living room window of her home in Kerrera Street, Ardoyne.

Mary McBride who lives in the house with her son Joseph and is paralysed on one side usually sleeps in the living room but was in hospital at the time of the attack receiving treatment for heart problems.

Joseph McBride phoned the PSNI, who "took 18 minutes to arrive and stayed for all of one and a half minutes. They didn't seem a bit fussed and told me it was because of the loyalist marching season and the Tour of the North Orange parade". McBride's two brothers were killed by the UVF.

On Saturday 18 June, at around 2.30am, just hours after the 'Tour of the North' loyalist parade finished, five nationalist homes on the Ligoniel Road, North Belfast, were attacked with petrol and paint bombs by loyalists who entered the area in a number of cars. The houses attacked are mainly occupied by pensioners, including one woman in her 80s.

Sinn Féin councillor for the area, Tierna Cunningham, said: "These people are mainly vulnerable pensioners and it has to be asked of the PSNI how they can manage to justify having 80-plus Land Rovers on the Ardoyne Road to facilitate an Orange march while not one is here to stop nationalist pensioners being attacked by loyalist paramilitaries."

At around 8.50am on Saturday 18 June, a disabled nationalist man escaped serious injury after he was attacked by loyalists who got out of a black BMW car and beat him with a hammer and wrench in Madrid Street.

Meanwhile, Sinn Féin in Derry has appealed for calm in nationalist and loyalist areas of the city as the loyalist marching season gathers pace.

Assembly member Raymond McCartney was speaking after a mother of four children said she would not move back to her Fahan Street home, which came under paint-bomb attack from masked loyalists operating from the city's walls.

McCartney said more should be done on the ground to relieve sectarian tensions. He called on young nationalists not to fall into the unionist agenda of contributing to sectarian tensions across the Six Counties.