Debt deal is only the first step 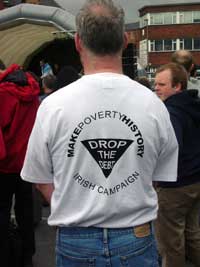 "A new deal between the rich and poor of the world" was how British Chancellor Gordon Brown described the landmark decision of the British and American Governments to cancel the debts of 18 states. US treasury secretary John Snow said the €45 billion deal was "historic".

Yes, the clichés, superlatives and a lot of mutual backslapping were all in abundance last weekend, as the British and US negotiators unveiled their debt deal in what Gordon Brown hopes will be a series of positive measures, culminating in July's G8 summit at Gleneagle's in Scotland and even on into ongoing World Trade Organisation talks.

So what does it all mean? Who really benefits? What are the downsides and what do the anti-debt campaigners and NGOs, who are on the ground in Africa and other regions, think of the debt deal?

So what was agreed?

The agreement, which will write off the debt of 18 countries immediately, with a further nine able to qualify in the coming months, means that Africa and its future economic development has finally been put centre stage by the wealthiest and most powerful states, who will, at the coming G8 summit, discuss further measures on trade and aid for the less developed economies of the world.

What are the IMF conditions?

The debt cancellation does not come without a price. To qualify you have to be what the International Monetary Fund and the World Bank define as a Heavily Indebted Poor Country (HIPC) and have entered into a Structural Adjustment Programme (SAP). The simple definition of this is that you have to build a market economy in your state, with privatisation of state resources and no extra spending on health, education and other services that would mean borrowing to pay to build these resources and no barriers to trade in your economy.

For many poor states, this is a chicken and egg situation, as speculative borrowing could build the infrastructure that could kick start economic growth, and many new regimes want to be able to show they can deliver the basics like health, education and housing.

For example, the ANC commitment to build a million houses in its first term of office would never have been feasible in many other African states, as they would not have had the resources to invest in such a massive investment. Yet the benefits flowing from the housing programme are immense.

In Venezuela, President Chavez has been able to divert substantial amounts of oil revenue into his new education, health and small worker business projects. Again, this course of action is not even feasible in the poorer African states.

The IMF view is that many of these states are in debt because of badly planned or executed spending and investment projects. The IMF does not include any criteria for local democracy, human rights or labour laws in its criteria.

What about trade and aid?

All these economies came late into the globalised industrial world and post-1945, most had three options open to them. They could develop their economies by trade, by industrialising or through loans.

Trade was difficult, as the price of primary goods, like basic foodstuffs, cotton, silk etc has been falling since the end of World War II. The price of finished branded goods, the profits from which accrue in the industrialised states, has gone up and up, leaving the less developed economies at a disadvantage.

It was hard to industrialise because that needed international partners with the knowledge and expertise in the industries you were targeting. Just think of all the inward investment funded in Ireland by the Irish and British governments that went to the wall over the last 30 years and you have an inkling of the problem. Imagine if you didn't have a domestic business sector and were depending on this international investment to drive your economy.

Then there was the problem of how to fund any of these investments, and this brings us neatly to the issue of borrowing. Yes, there was money wasted on armaments and palaces and wars, but a lot of it went into bad business decisions and funding western companies who just moved somewhere else when times got tough.

Where this leaves us is that there are two vital missing pieces in the G8 plan. Are the G8 prepared to lead the campaign on fair trade and make poverty history in the states with devastated economies and sick dying populations?

What about the debt campaigners?

Oxfam, who have led the Make Poverty History campaign, welcomed the deal but said it did not go far enough. Max Lawson, a policy adviser, said that "today's agreement is important because it endorses the principle of 100% debt cancellation", adding that "the fight now on is to get 100% debt cancellation for all the countries that need it".

Oxfam also said that "debt is only one part of the overall picture". They say that "the pressure is now on for a doubling of aid by €50 billion and serious progress in reforming unfair trade rules".

Trocaire said the debt deal was welcome but warned that it "may deliver little in extra finance for poor countries without a guarantee that the money used for debt relief will be additional to existing aid".

Trocaire spokesperson Caoimhe de Barra said that the deal will "result in savings of about $750 million this year for these countries" and that "past debt relief has been effective - it has meant that 2 million children in Tanzania now have a place in school".

De Barra also pointed out that the G8 have a dishonourable reputation of using aid money to cancel debt and that France's current aid budget is actually cancellation of old debt.

The World Development Movement, whose Daleks demanding that we "exterminate the debt" were visible as part of the protests outside the G8 movement finance ministers meeting last weekend, also welcomed the US/British deal, saying it was a "first good step".

Martin Powell, a WDM debt campaigner said: "The G8 have taken a worthwhile step forward in cancelling 18 poor countries' debt. However, research shows at least 62 poor countries need full debt cancellation if they are to meet the Millennium Development Goals".

The G8 Finance Ministers' proposals have to be put to the annual general meetings of the IMF, the World Bank and the African Development Bank. Then there is the position of individual states and international blocs like the EU towards aid. The 26 Counties have consistently fallen back on their commitment to give 0.7% of GDP as aid. The French and Germans have agreed to meet this target by 2012 and 2013.

11 - number of states who spend more annually on debt relief than healthcare. This includes Ghana, Malawi, Uganda and Zambia

$900 billion - the amount of money spent annually on defence globally

100 million ounces - the amount of gold currently held by the IMF and estimated by Oxfam to be worth over $45 billion. Selling just 10% of this gold would provide enough funding to stop half a million mothers dying in childbirth annually.

$1.5 billion - annual extra money going into the indebted states as a result of the G8 deal