Tension over 'Tour of the North' parade 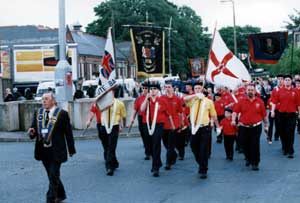 Nationalist residents in North Belfast have expressed serious concern after the Parades Commission gave permission for the triumphalist 'Tour of the North' Orange parade to pass nationalist homes and the flashpoint Ardoyne shops area this coming Friday 17 June.

In its ruling, the Parades Commission said that loyalist supporters cannot accompany the march between the junction of Woodvale Road and Woodvale Parade and the junction of Crumlin Road and Heskith Road, "until directed by the PSNI".

This year's ruling is the first test of the Parades Commission's powers under new legislation which states that march organisers are responsible for the actions of anyone supporting a parades.

Already, the Parades Commission has declared a number of planned Orange marches illegal because the Orange Order has purposely failed to fill in parading application forms properly. This is a strategy the Order has adopted to ensure that individual Orangemen can't be arrested in the event of unlawful displays taking place during their marches.

Last June's Tour of the North Orange parade resulted in a standoff at the Ardoyne Shops when nationalist residents blocked the Crumlin Road in response to the news that loyalists had stormed the casualty department of the Mater Hospital on the Crumlin Road.

Serious violence broke out at last year's 12th Orange march after hundreds of loyalists, including well-known UDA figures, attending the parade, were allowed past the Ardoyne shops by the PSNI.

In the course of the meeting the Sinn Féin representatives impressed upon Woodward the need for the rights and entitlements of nationalist communities to be upheld.

Speaking after the meeting, Gerry Kelly said that nationalist communities across the North have displayed a willingness over many years to enter into meaningful dialogue with the Orange Order over parades but unfortunately, these advances have been spurned.

"The intransigence of the Orange Order in their refusal to engage in meaningful dialogue with nationalist residents has been rewarded with triumphalist parades being forced through nationalist areas," he said.

"A massive responsibility rests with the leadership of the Orange Order to end its attempts to march through nationalist areas without entering into a process of real dialogue and reaching agreement."

Meanwhile, Orange Order Grand Master Robert Saulters has been formally cautioned by the PSNI over his involvement in an illegal Orange parade in East Belfast in February.

The parade, to commemorate two former Orangemen and UDR members, was deemed illegal after the Orange Order deliberately failed to fill in their parading application forms properly in an attempt to shy away from their obligations as organisers.

It is understood five more Orangemen will be cautioned in the near future.

• Sinn Féin President Gerry Adams and Councillor Tom Hartley will meet with the Parades Commission in Belfast today to discuss the circumstances around the upcoming Whiterock Parade, due to take place on Saturday 25 June.