Torture in the Basque Country 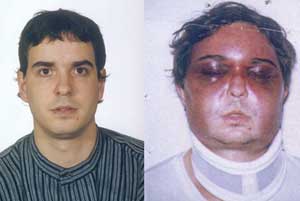 The UN's Committee Against Torture has given 90 days to the Spanish state to implement the necessary measures to put an end to the practice of torture by Spanish security forces.

The UN decision came as a consequence of the case of Basque citizen Kepa Urra, who was humiliated and beaten by the police officers after his arrest. Urra was arrested in January 1992. They took him to an open space. He was undressed, handcuffed, dragged on the ground and beaten up. After six hours of questioning, he needed medical attention, as he was suffering from hypertension; he could not talk or move; he has lost consciousness; he was bleeding from nose and mouth. In hospital, the doctor found injures to his head, face, eyelids, nose, back, stomach, hips, legs and arms. He also suffered from spinal injures that required immobilisation.

Although initially in 1997 a Basque court sentenced three members of the Guardia Civil to over four years imprisonment, this was reduced in appeal to only one year imprisonment by the Spanish Supreme Court. On 6 August 1999, the Spanish Government reprieved the police officers. The impunity enjoyed by state-sponsored torturers was also criticised in the UN report, which found that "the lack of proper punishment is not compatible with the duty to prevent torture".

The establishment's condoning of abuse and the impunity enjoyed by those who practice it is one of the main obstacles to the eradication of torture in Spain. Government, security forces and tribunals work together to protect human rights violations that they are then quick to denounce when carried out by other governments.

The elements of Urra's case can be applied to many others. But in most torture situations, the transgressors do not even make it to court. This is the case with Unai Romano (see photograph) — whose battered face after the incommunicado period he spent under police custody has become a burning image of police brutality. Yet his case has been rejected by a civil court in Madrid.

In the report presented by the court on its decision, it even threatened the possibility of initiating judicial procedures against Romano for what the judge considered was a waste of court time and for presenting false evidence to substantiate his case. The youth's lawyer has questioned the judge's impartiality, as he never interviewed Romano, his lawyers, or the doctors who signed the medical evidence that he deemed bogus.