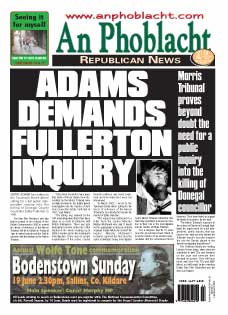 Gerry Adams has written to the Taoiseach Bertie Ahern calling for a full public independent inquiry into the killing of Donegal County Councillor Eddie Fullerton in 1991.

The Sinn Féin President, who was highly critical of the refusal of the Dublin Government in 2002 to extend the terms of reference of the Morris Tribunal, will be in Dublin on Friday at 1pm to attend a protest at the Dáil to coincide with the debate on the Morris Tribunal.

"It has been known for many years that some of those Gardaí now discredited by the Morris Tribunal were centrally involved in the totally flawed investigation into the murder of Sinn Féin Councillor Eddie Fullerton in 1991," said Adams.

"The killing was claimed by the UFF amid allegations that it had taken place as a result of collusion with British Intelligence. There was also widespread concern at the role of the Gardaí in the weeks leading up to Eddie's murder and in the subsequent investigation. There was no proper examination of the scene, crucial forensic evidence was never examined and key witnesses were not interviewed.

"In March 2002, I wrote to the Taoiseach Bertie Ahern asking for the terms of reference of the Morris Tribunal to be extended to include the murder of Eddie Fullerton.

"This request was dismissed in a letter from the Justice Minister Michael McDowell who said 'it would not be appropriate to bring an entirely separate matter within the remit of the Inquiry'. Minister McDowell's response ignored the fact that the same individuals being investigated by the Morris Tribunal at that time also had huge questions to answer in relation to their role in the investigation into the murder of Eddie Fullerton.

"It is a disgrace that for 14 years now the government have failed to treat the murder of an elected representative with the seriousness that it deserves. They have failed to support the family in its search for the truth.

"The Morris Tribunal's exposure of the actions of Gardaí in Donegal highlights the urgent need for a full independent, public inquiry, that can uncover the truth not only behind the Fullerton murder, but also examine the role the Gardaí played in the flawed investigation that followed."

The Fullerton family are visiting Leinster House today, where they are scheduled to brief TDs and Senators on the case and reiterate their demand for justice. They will have lunch with Sinn Féin TDs and MEP Mary Lou McDonald before meeting Dublin Sinn Féin Councillors and the city's Lord Mayor.