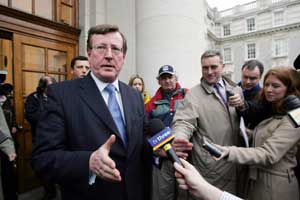 As the Ulster Unionists dusted themselves off after last week's electoral battering that left them one with just one MP, and in Sylvia Hermon a maverick one at that, did they wonder haven't we been here before? As David Trimble, usurped from Westminster, blamed all but himself for his dilemma, did he wonder why was history repeating itself?

31 years ago in 1974, a February Westminster election replaced all of the pro-Agreement unionist MPs with anti-ones, a subsequent October Westminster election dumped UUP leader Harry West out of office as Fermanagh/South Tyrone fell to Independent Nationalist Frank Maguire. The February poll had created a hung parliament and the October vote returned Wilson's Labour Party to power.

At the time, unionism was split between those who favoured power sharing with the SDLP and those, including the DUP, Vanguard (once the home of David Trimble) and rebel Ulster Unionists, who didn't.

Those opposed to the Sunningdale power sharing agreement won the support of unionist voters through their United Ulster Unionist Coalition (UUUC). This week, Trimble was quick to blame republicans for his demise. So who did Brian Faulkner blame when unionists split and reneged on power sharing in 1974?

Faulkner replaced Chichester Clarke in 1971 as unionist opposition to the replacement of the B-Specials by the RUC was seen as treachery on a grand scale. Clarke had some electoral setbacks during his leadership, including losing two Stormont seats to Ian Paisley and William Beattie and then Paisley was elected as Westminster MP for North Antrim, beginning his 35-year electoral term.

Clarke had replaced Terence O'Neill, who had split unionists over his own piecemeal proposals for reform of the unionist statelet. James Molyneaux, who took over from Harry West in 1979, was in turn displaced in 1995 by a more militant dynamic and very much younger Trimble, in all areas a contrast to then ageing UUP leader. I don't remember Molyneaux blaming republicans for his demise either.

All unionist leaders forced out of office, and that includes Trimble, have some things in common, they were either seen as not being hardline enough, which was what happened to Molyneaux, or half heartedly entered the reform process.

It is the half hearted element that is vital. If you strip away Trimble's fawning media obituaries — yes he got the Nobel prize, but so did Kissinger — you have someone that ultimately never acknowledged the right of nationalists to equality of treatment.

In public, Trimble was a supremacist, the British state, its institutions and society was superior to the "pathetic, mono ethnic, mono cultural South". It was Trimble who claimed that: "If you took away Catholicism and anti-Britishness, the state (the 26 Counties) doesn't have a reason to exist".

He squandered unionist goodwill towards the Good Friday Agreement and by his failures to fully engage in the Peace Process left, like many of his predecessors, the political room for the Paisleys of this world to grow and more importantly, to win votes.

Perhaps the lesson finally that needs to be learnt is that unionist voters will continue to shred their own leaders until they come to terms with the reality that the unequal status quo cannot continue.

Trimble was perhaps no better or worse than Paisley, though he is continually painted as the more reasonable and rational of the two, but it's hard to forget them walking down the Garvaghy Road together, hands held aloft triumphantly.

Republicans have always disputed the right of this unionist minority to deny the civil, political and economic rights of not just nationalists but all of the people on the island. Republicans have never asked unionists to dilute their own rights, just to accept as equals the others they share the island with.

Trimble wouldn't fully take up this baton, leaving Paisley the space to take up the "sack cloth and ashes" mantra. As we move on post Trimble, those who have most to learn from his demise are perhaps Peter Robinson and Nigel Dodds, for it is they who are the most likely future leaders of unionism.

The question is, have they the nerve and the ability to finally learn from the unionist past and finally, honestly, begin a process within their own community that will face up to them leaving their own half way house?

So as another Ulster Unionist prepares to watch the clock run down in the House of Lords, republicans will be wondering haven't we all been here before?