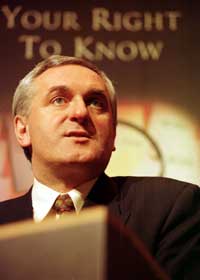 Sinn Féin Dáil Leader, Caoimhghín Ó Caoláin TD has said he is "appaled" that the Taoiseach seems to be satisfied that the 10,000 affordable houses promised under the Sustaining Progress Agreement will be delivered "whenever".

Ó Caoláin said he is "gravely concerned at the Taoiseach's attitude" to the situation after questioning him during Leader's Questions on Wednesday.

"When I last raised this question with the Taoiseach in February, he indicated in his reply there had been 500 completions under this additional commitment and that a further 1,500 completions would be recorded in 2005," said the Sinn Féin TD. "Yet last weekend in Killarney the Construction Industry Federation's house builders' conference was advised that not one of the 10,000 affordable homes under Sustaining Progress had yet reached the planning stages.

"When I queried the Taoiseach in relation to this today he failed to dispute the CIF claims.

"It is disgraceful if, two years after 10,000 additional affordable houses were promised under Sustaining Progress, not one of these houses has reached the planning permission stage. Only a few hundred units have yet been provided under the earlier Part V planning rules, which were introduced four years ago.

"The pledge of 10,000 additional houses was a key pledge of the social partnership agreement in March 2003. I am gravely concerned at the Taoiseach's attitude to the housing crisis in which many thousands of people are priced out of the market and are also denied local authority housing."