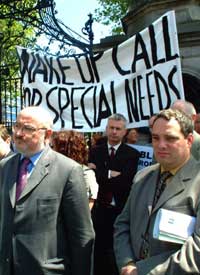 The Taoiseach Bertie Ahern has been challenged by Sinn Féin Dáil leader Caoimhghín Ó Caoláin to change the "fundamentally flawed" Disability Bill. The Disability Legislation Consultation Group, representing disability organisations, is threatening to pull out of the process and oppose the Bill. Deputy Ó Caoláin urged the Taoiseach to meet the Group and adopt their five minimum demands to salvage the Bill. When he clashed with the Taoiseach the Ceann Comhairle Rory O'Hanlon proposed the suspension of Ó Caoláin from the business of the House. The vote on the suspension was taken earlier today (Thursday).

Speaking after he was suspended, Ó Caoláin reiterated his challenge to the Taoiseach. He said Bertie Ahern's response was "shameful". Ó Caoláin said:

"I put to the Taoiseach the deep disappointment and anger among people with disabilities at the refusal of the Government to adopt their key recommendations to salvage the flawed Disability Bill which is now at Committee Stage. The Disability Legislation Consultation Group (DLCG) was established by the government itself to involve all in the sector in the process of framing the Bill. But later today the DLCG will be considering its future and whether to pull out of the process entirely and to oppose the present Bill.

"Minister Frank Fahy told the DLCG last week that their five key demands to salvage this Bill will not be met. I asked the Taoiseach to confirm that the Minister said that a meeting with the Taoiseach would serve no purpose and if that was the Taoiseach's view also. He responded by saying he would write to the DLCG. That is not good enough.

"The government must take on board the DLCG's five minimum requirements — which are:

• Clear right to assessment of need for all disabled people

• Services to be provided within a reasonable and agreed timeframe

• Each government department to produce a plan for disabled people's inclusion

• Clear duty on all government departments and public bodies to include disabled people in plans and services and the right to redress if they are excluded.

"I made a last appeal to the Taoiseach while the Bill is still at Committee to include these minimum and essential demands in the Bill and give disabled people their rights. I reiterate that appeal.

Ring-fencing for betting industry but not for disabilities

"The National Parents and Siblings Alliance estimates that even under the new multi-annual funding programme it will take until 2021 before the present backlog of people waiting for residential care will be cleared. Elderly people will be left waiting and wondering how their disabled children will fare after their deaths.

This is the first time during his almost eight years in the Dáil that Ó Caoláin has been suspended. Some observers have noted a distinct edge in the approach of Ceann Comhairle Rory O'Hanlon, another Cavan-Monaghan deputy, to his Sinn Féin constituency colleague, and the surprise may not be the suspension itself, but that it has not occurred before now.