The passage of time will not diminish our demand for truth 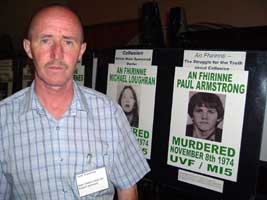 Gerry Armstrong, whose brother Paul was killed in 1974

"PSNI and former RUC members and British Army undercover intelligence agents are increasingly in a battle with each other, as each revelation about the dirty war threatens to expose the extent of the role played by the British in state-sponsored killings throughout the North," says Robert McClenaghan of An Fhírinne.

Talking to An Phoblacht recently while attending a major conference in Belfast on state violence, McClenaghan said that British forces had resorted to legal duress and intimidation in their attempt to conceal the activities of British Army Intelligence operatives who played a key role in targeting nationalists to be killed by unionist death squads.

"It has become clear over the years that these intelligence operatives actively collaborated with and fed intelligence to the unionist death squads and that the undercover Force Research Unit (FRU) was a high level intelligence unit tasked with handling undercover agents in the Six Counties and the 26 Counties," he said.

The FRU's activity only came to light through the persistent campaigning of human rights groups and the families of people killed by the UDA and the UVF as part of the British Government's policy of collusion. McClenaghan called for an immediate inquiry into "a policy that has cost the lives of hundreds of nationalists".

On Saturday 30 April a conference in the Devinish Complex in Belfast saw up to 150 people, mostly the relatives of people killed by state forces during the conflict, debate issues thrown up by the state's attempts to ignore those killings.

Titled State Violence, State the Truth, the conference was organised by campaign groups Relatives for Justice and An Fhírinne and provided a forum for the relatives of those killed to talk about their experiences and how their lives were affected by the killing of a loved one at the hands of the state.

Among the issues discussed was how the British have attempted to cover up the killings of many nationalists, or as one contributor described it, "the masking of the truth", through the inquest system, the new Inquiries legislation, and the recent funding of a new internal PSNI unit to examine pre-1998 killings.

Speaking strongly on these issues was Relatives for Justice campaigner Clara Reilly, who told the audience that victims of state violence would have no confidence or trust in the new NIO/PSNI crime review branch.

"The Serious Crime Review Team (SCRT) is no different a strategy than that which exists in the form of the Inquiries Act, preventing the truth surrounding the killing of Pat Finucane from coming to light," she said.

"There are equally dangers that the same people involved will use the SCRT and continue to police politically.

"If Hugh Orde and the British Government genuinely want to address issues of the past, then as a matter of building trust we call on them to now make public the suppressed Stalker/Sampson and Stevens Reports into collusion in full.

"We have no confidence that the SCRT process will deliver; instead we believe that it will act against our interests whilst promoting the state interests," she said.

Also attending the conference was Tom Holland, of the Ardoyne Commemoration Project. He was keen to explain to An Phoblacht what the group is about.

"A total of 99 residents lost their lives as a result of the political conflict between 1969 and 1998. Most of these were killed by the RUC, British Army or loyalists.

"The project has allowed families to speak aloud for the first time about their experiences; we want to let the truth be heard."

"The British Government are playing politics with this issue because they don't want to deal with the truth."

Holland also explained how the Project has compiled a book based on over 300 interviews of family, friends and comrades of those from Ardoyne who died; Ardoyne: The Untold Truth, is a moving attempt by a community to tell its story of pain and in loss in its own words.

Families of those bereaved were keen to tell their stories. One of those was Gerry Armstrong, whose brother, Paul Armstrong, was killed by loyalists in November 1974.

"I think this is brilliant what is happening today, it gives both myself and my family the chance to have our voices and opinions heard," he said.

"My brother was brutally tortured at the hands of the state, my mother could not bring herself to visit his grave. The British Government has no idea about the pain they have caused to my family."

Also speaking at the conference was John Finucane, son of human rights lawyer Pat Finucane, killed by the UDA in 1989. The Finucane family have worked tirelessly in trying to secure an independent inquiry into the killing and have rejected the British government's Inquiries Act.

"Myself and my family are totally against the Inquiries Act and we have made this clear, we will continue to fight for a meaningful inquiry which is what we rightly deserve," he said.

A longtime member of Sinn Féin, Campbell was a law student at Queen's University, Belfast, when a gunman entered a crowded hotel where she was having a drink with friends and shot her dead. The UVF claimed responsibility for the killing.

Sheena had stood as a candidate for the party in the Upper Bann area in a Westminster Parliamentary by-election in 1990.

At the time, Sinn Féin President Gerry Adams described the killing as "part of the ongoing campaign of murder against members of Sinn Féin, which has seen many of our friends killed or wounded".

Brendan spoke about the politics surrounding collusion. "we have to keep fighting for justice, as we need to stop this policy from happening anywhere else".

"Fifteen years ago, collusion was seen as a republican conspiracy theory; now it has respectability. This shows that change has been brought about by the efforts of the families and campaign groups such as Relatives for Justice and An Fhírinne.

"The £32 million which has been offered by the state to help with inquires is nothing but a drop in the ocean to what they have spent on operations in which they killed our friends and comrades. Justice will only prevail if the people keep fighting."

No to plastic bullets

On behalf of the United Campaign against Plastic Bullets, Frances Meehan, sister of Michael Donnelly, and Helen Whitters, mother of Paul Whitters, said: "We would like to place on record today that no police force using these weapons will gain our consent.

"The introduction of the new AEP by the PSNI is a disgraceful development and another example of the lack of will of the British Government to implement entirely the proper Patten report into policing.

"Last year, we lost one of our esteemed members, Dominic Marron. He died as a result of the injuries he sustained as a 14-year-old when he was shot in the head by a plastic bullet fired by the RUC.

"He is the 18th person to die from a plastic bullet wound."

This conference was a valuable opportunity to bring families affected by the state and state sponsored killings together to share their experiences, identify their needs and show that their demand for justice has not diminished with the passage of time.