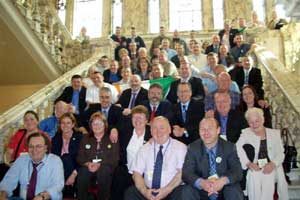 The results from last week's local government elections in the Six Counties, which saw Sinn Féin increase it's share of the first preference votes cast and win an extra 18 seats, confirmed the growth of the party and consolidated its position as the largest nationalist party in the Six Counties.

The increase in Sinn Féin's vote sees it holding 126 seats in councils throughout the Six Counties and with candidates winning seats on Ballymena and Coleraine, the party now has a presence on unionist dominated councils where it had none before.

These gains were the highwater mark of an election that also saw Sinn Féin win extra seats in Limavady, Omagh and Strabane. In Belfast, Alex Maskey topped the poll in Laganbank in South Belfast, a ward where the party had never won a seat before.

Monica Digney's presence on Ballymena council, the heart of DUP leader Ian Paisley's bible belt constituency and the fact that Sinn Féin topped two out of three wards in nearby Ballymoney, will give cause for concern to unionists, who regard North Antrim as their promised land, where the 'Big Man's' writ has run unchallenged for many years.

Billy Leonard also became the first Sinn Féin councillor to be elected to Coleraine council, having been elected in the Bann Ward, while his wife Valerie had a good showing in the Skerries Ward, where Leonard previously was elected on an SDLP ticket.

Banbridge, another unionist-controlled council, will begin it's new term with a Sinn Féin member after Dessie Ward won a seat in the Knockivagh District.

This increase in seats and percentage will also send out shock waves to those anti-republican elements in the media, as well as Sinn Féin's political opponents, especially those in the British and Dublin Governments whose campaign of vilification and of criminalising the party failed to deliver the anti-Sinn Féin vote they hoped for.

The council election results follows the trend set in the Westminster polls when Sinn Féin voters increased their representation by returning five Sinn Féin MPs, an increase of one after Conor Murphy took the Newry and South Armagh with a massive swing to Sinn Féin.

In all, Sinn Féin made considerable gains mainly at the expense of the SDLP in the local government elections.

Monica Digney created history when Sinn Féin voters elected her in the Bannside area of Ballymena, where she will take her seat in a council on which the DUP displaced the Ulster Unionists.

In Ballymoney, Sinn Féin trebled its representation with Anita Cavlin and Daithí McKay joining sitting councillor and North Antrim Assembly member Philip McGuigan. This was at the expense of the Ulster Unionist Party, which now has no councillors in either the Bushvale or Bann Valley Wards.

In Banbridge, Dessie Ward took a first ever seat for Sinn Féin when he was elected to represent the Knockivagh area.

In Moyle, Sinn Féin made huge gains and increased its share of seats from one to four, up 20.9%. In Limavady, the party now has six seats, an increase of two (up 6.5% on the 2001 vote) while in Strabane Sinn Féin took its total number of seats to eight, an increase of one.

In Mid-Ulster, Sinn Féin became the largest party in Magherafelt when it gained a seat to take its total to eight councillors, while in Dungannon it gained a seat and now sits on nine. Former POWs Ian Milne and Peter Bateson both polled well for the party and will no doubt have many an intense debate in the chamber with the DUP's Reverend William McCrea.

A feature of the election, although still to be fully explored and analysed, is the extent to which the unionists, Alliance and SDLP voted tactically to keep Sinn Féin out.

A clear example of this was in Dunmarry Cross in the election to Lisburn City Council, where Sinn Féin was looking to increase its tally of seats from four to five.

However, the surplus of the last unionist to be elected transferred en masse to the SDLP, which took that party's candidate past Sinn Féin's Mairéad Ní Adhmaill. Deborah Devenny just missed out in the Pottinger Ward in the East of the city due to similar tactical voting.

In Belfast, the party's number of councillors remains 14, despite the clean sweep in the Lower Falls and winning four out of five in Upper Falls.

Former mayor Alex Maskey topped the poll in the Laganbank Ward in South Belfast, while Stiofán Long just failed to get elected in the Balmoral Ward, also in South Belfast.

Despite increasing its share and percentage of votes in Derry, Sinn Féin Mayor Gerry Ó hEára became one of the high-profile candidates to lose his seat.

Although Ó hEára recorded a substantial number of first preference votes, he fell victim to vote management, when party strategists thought his high profile as mayor would be enough to carry him to victory.

A city councillor for 16 years, he will now be replaced by new Sinn Féin councillor Elisha McLaughlin.

Altogether, the Sinn Féin vote held solid in Cookstown, Newry and South Down.

Calling all Six-County PROs and councillors

An Phoblacht does not have photographs of many of our newly-elected councillors across the Six Counties. We would appreciate it if successful candidates or their PROs could forward photographs to our Dublin office ASAP, either by mail to 58 Parnell Square, Dublin 1, or preferably, in jpeg format by email to :