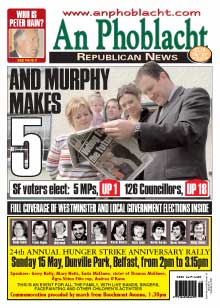 And then there were five. After months of consistent systematic attacks by political opponents in Ireland and internationally, not to mention ever hostile elements of the mainstream media, the Sinn Féin vote not only held up near the record percentage share achieved last June, the party also registered its 10th consecutive election where the number of Sinn Féin elected representatives increased, this time in both Westminster and local elections, culminating in five MPs and 126 councillors.

ROBBIE SMYTH pours over the details constituency by constituency, where the Sinn Féin vote rose in 13, fell in five, by less than 1% of three of these, with small falls also in Mid-Ulster and West Tyrone.

A 'massive' performance in Antrim

In East Antrim, Sammy Wilson unseated the UUP's Roy Beggs, who had held the seat since 1983, with a massive 13.59% increase in vote share, leaving the DUP just marginally under 50% of the votes cast. Sinn Féin's James McKeown polled 828 votes, a slight increase on both the 2001 result and the 2003 Assembly vote.

The North Antrim poll saw Ian Paisley take 54.78% of the vote and like many of the DUP elected MPs, also give him the chance to launch into a hymn followed by a round of vitriolic attacks on republicans, so no change there.

Where there was a significant change was the growing vote of Sinn Féin. Philip McGuigan cementing his Assembly election victory here in 2003, opening a wider gap between Sinn Féin and the SDLP. He also displaced the UUP, coming second to Paisley with 15.66% of the vote.

South Antrim saw the DUP's Willie McCrea, displaced out of Mid-Ulster by Martin McGuinness in 1997, but re-elected here at the expense of the anti-Agreement UUP MP David Burnside. The DUP took 38.22% of the vote compared to the UUP's 29.14%.

This was another constituency where Sinn Féin support grew, as the SDLP vote virtually stood still. Henry Cushnihan took 11.61% of the vote, up on both the 2001 and 2003 Assembly elections, while the SDLP stood virtually still on their 2001 performance.

Belfast East returned Peter Robinson as expected, but what was interesting was how both the DUP and UUP vote grew in this constituency, both parties registering 6% plus vote increases.

Sinn Féin's Gerry Kelly registered another percentage growth in the Sinn Féin vote in North Belfast. The party won 28.64% of the vote, coming second to the DUP's Nigel Dodds, who retained the seat won in 2001.

The Sinn Féin vote was also up on the Assembly performance of 27% of first preferences. At 16.21%, the SDLP registered their third consecutive election of falling vote share here.

Unionist recrimination came thick and fast after the South Belfast returning officer announced the election of the SDLP's Alasdair McDonnell. The seat fell to the SDLP as the DUP ended a long standing pact with the UUP not to split the unionist vote here in Westminster elections.

Jimmy Spratt was the DUP candidate and he won 28.43% of the vote, compared to 22.68% of the vote for the UUP's Michael McGimpsey. The UUP vote fell by a substantial 22% since 2001. The change was all the more dramatic as the UUP had managed to stay ahead of the DUP in the 2003 Assembly elections with the two parties on 27% and 20.84% respectively.

In West Belfast, Sinn Féin registered not just its highest ever vote share but the highest of the election in the Six Counties. Gerry Adams took 70% of the vote and the seat for the fifth out of six times he has stood.

Sylvia Hermon was perhaps the only UUP member with a smile on her face last weekend, having been re-elected for North Down. For those of us outside of the Unionist community looking in, this is a confusing constituency.

The UK Unionists elected not to stand this time, even though they won the seat in 1997. In 2001 it was the Alliance Party who stood back to give Hermon a clear run, but they did run this time.

The DUP didn't run here in 2001, but former UUP Assembly member Peter Weir took 35.07% of the vote for the DUP this time. Don't worry if you're confused, it's probably fool's gold on this coast!

The SDLP's Eddie McGrady won South Down for the fifth consecutive time, albeit with a marginal decrease in vote share, which at 44.75% was down 1.6% on his 2001 performance. The result was in contrast to the 2003 Assembly elections, where the SDLP vote fell to 35%.

Sinn Féin's Caitríona Ruane recorded the highest ever vote tally for Sinn Féin in South Down. The party's 12,417 vote was higher than the 2003 Assembly turnout and put Ruane at 25.77%, up over 6% on 2001, but marginally down in vote share on the 2003 performance, when Sinn Féin polled 26.48% of first preferences.

Michelle Gildernew won Fermanagh/South Tyrone for Sinn Féin by the narrowest of margins in 2001. Now, four years on, Sinn Féin's growth in the constituency is still upward. Gildernew's 18,638 votes, 38.2% of the poll, was over 4% up on 2001 and gave Sinn Féin a 4,582-vote majority, again an increase on the 2003 Assembly election result.

If Unionists were pondering the electoral battles in South Belfast and Upper Bann for the international media, especially the Dublin-based papers and news organisations, not to mention the odd Cabinet Minister or two, the focus was on Foyle, where John Hume was standing down after holding this seat since 1983.

The question gripping the media attention was could Sinn Féin cross the gap between the two parties and take the seat that some had felt had been specifically designed to enable a Hume election victory in 1983, when the current Foyle Constituency first came into being.

The result was a Durkan win for the SDLP, who polled 46.3% of the vote. Sinn Féin's vote share at 33.24% was virtually unchanged from the 2003 Assembly elections but what was significant was that, as was the case in South Down, the party's actual vote tally continues to rise. In 2001, Sinn Féin won 12,988 votes in Foyle compared to 13,214 in 2003 and 15,162 last week. The SDLP share has been falling across Westminster elections.

When the Labour third term ends in four or five years, this constituency will perhaps provide the most interesting rematch and as Sinn Féin General Secretary Mitchel McLaughlin said at the Foyle count, the campaign to take Foyle for Sinn Féin starts here.

There were few who doubted that Jeffrey Donaldson wouldn't win Lagan Valley, despite shifting horses from the UUP to the DUP mid term; the question was what would his margin of victory be?

Sinn Féin's Paul Butler, who narrowly missed out on an Assembly seat here in 2003, won 7.51% of the vote, just slightly below his 2003 showing but with a greater gap between Sinn Féin and the SDLP's Patricia Lewsley.

In Mid-Ulster Martin McGuiness retained his seat for the third consecutive time, with 47.64% of the vote. This was one of the few constituencies where the DUP vote fell, in this case by 7.66%, probably because the UUP didn't run here in 2001.

The DUP's Iris Robinson also held Strangford for a second time, increasing her majority from 1,110 in 2001 to 13,049 this time. Robinson who is also an Assembly member and councillor, took 56.49% of the vote.

UUP and SDLP in disarray

And so it was so long to David Trimble in Upper Bann, without this time any of the acrimony outside the count centre between rival unionist groups that characterised the count here in 2001.

Sinn Féin's Pat Doherty was re-elected in West Tyrone with 38.89% of the poll, almost a repeat of the party's vote share here in the 2003 elections. The SDLP vote collapsed, as the party campaigned in disarray over the 'would or wouldn't they' support Kieran Deeny, the not so independent Independent candidate.