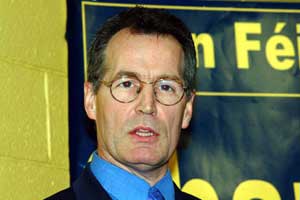 Sinn Féin candidate in North Belfast, Gerry Kelly, (above) has hit out at what he described as gross double standards after a PSNI member was awarded £416,000 for injuries he received when a British soldier shot him.

Stephen Mullock sued the British Ministry of Defence and alleged that the British soldier who seriously wounded him had been negligent in control and discharge of a gun.

Mullock was on duty in Belfast on 14 January 1998 when he gave chase to an unmarked vehicle acting suspiciously in North Belfast.

The PSNI pursued the car driven by the British soldier and stopped it at Carisle Circus, where the driver got out and shot Mullock, who was in uniform, in the chest.

Barrister Adrian Colton told Belfast High Court the action had been settled for £416,000. Mullock is now working in a PSNI desk job.

Kelly said that the awarding of over £400,000 to the PSNI member highlights the double standards employed by the British establishment when it comes to living up to their responsibilities to deliver meaningful justice for those who have died at the hands of the State and their proxies.

"This incident occurred at Carisle Circus in North Belfast, only yards away from where two Scots Guards shot and killed Peter McBride.

"This verdict sends a clear message that it is okay for the British Army to shoot dead an Irish nationalist, yet any other behaviour is deemed as unacceptable."