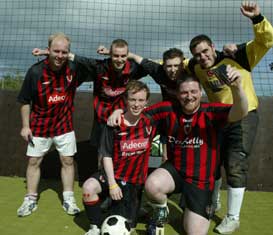 The inaugural One League five-a-side soccer tournament, organised to promote the creation of a unified Irish soccer league, proved a massive success last Sunday, when supporters' teams from Cork City, Derry City, Glenavon, Linfield and Bohemian FC played in a friendly yet competitive competition in Dublin.

On the pitch, Bohs (below) showed their worth by winning all four of their games to finish top of the table. The organisers now plan to make the tournament an annual event and to increase the number of teams competing.