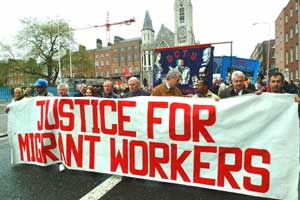 'Rights and entitlements for migrant workers' was the theme of the May Day march in Dublin last Saturday, where about 300 of the Turkish workers currently leading the war against the bonded labour conditions of migrant workers in Ireland, led a demonstration of some 400 people to celebrate May Day.

SIPTU official Eric Fleming co-ordinated the demonstration. Speakers included Sam Nolan, Joe Higgins, Tom Ryan from the Dublin Council of Trade Unions, and Patrick Maphoso, a young migrant worker from South Africa who is a member of Residents Against Racism.

All spoke of the urgent need for the Trade Union Movement as a whole to defend the rights of migrant workers, which are denied across the board in Ireland by a government which still has not introduced legislation to protect migrant workers against unscrupulous employers.