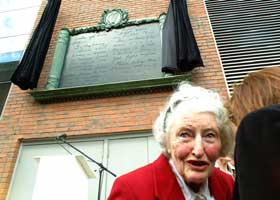 Blathnaid Uí Rathille, daughter-in-law of 1916 hero Michael Joseph Rahilly, known to all as The O'Rahilly, is pictured in front of a memorial plaque dedicated to him and unveiled on Moore Lane in Dublin last Friday, 29 April.

The O'Rahilly was the first of the 1916 leaders to be killed, and the only one to die in action. The plaque is inscribed with a letter he wrote to his wife as he lay dying on Moore Street.