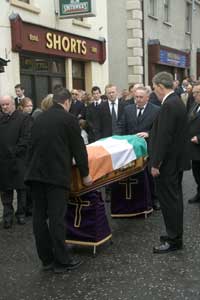 Paddy was born just before Ireland was partitioned in 1919 and always wished to see a united Ireland. Throughout his life, he was an advocate against British rule in Ireland and was a lifelong member of the South Armagh Green Cross.

His funeral cortege, draped in a Tricolour, left the family pub in North Street in Crossmaglen for Requiem Mass in St Patrick's Church at 11am.

Members of Crossmaglen Rangers formed a guard of honour for the GAA legend.

Among those present to pay their last respects to the man dubbed the "unofficial mayor" of Crossmaglen were Paddy's niece, Labour MP Clare Short, and Armagh football manager Joe Kernan, along with a representative of President Mary McAleese, local councillors and MLAs.

A packed Mass was celebrated by Paddy's nephew, Fr Malachy Murphy, who described him as a great family man and a wonderful husband and father.

"During difficult times, he would appear in the media pointing out wrongs and on occasions like this he will be remembered for his honesty and forthrightness," Murphy said.