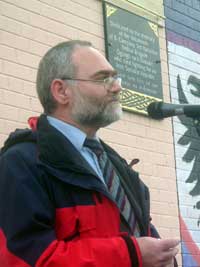 Sinn Féin TD Martin Ferris and Bernadette McAliskey were just two of the many people who travelled to the Short Strand last Sunday to speak at a Hunger Strike commemoration held in the area.

At the rally, a plaque was unveiled in honour of local IRA Volunteers by Betty Dorrian, whose husband Robert was killed on active service in 1972.

Former political prisoner Pat Magee traced the history of the area since the eruption of the conflict in the late 1960s, when British forces attempted to beat nationalists into the ground after they demanded civil rights.

He spoke fondly of Hunger Striker Patsy O'Hara, with whom he was interned in the 1970s.

Martin Ferris recalled his visits to the Clandeboye Estate at the height of the loyalist siege, when people had to live behind closed doors and barricaded windows. He chastised those Dublin Ministers "who were quick to jump on the British bandwagon and criminalise republicans, yet did nothing for the people of the area through 30 years of conflict".