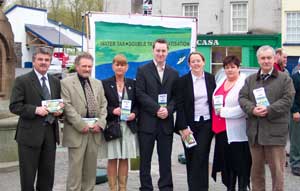 "We view it as an additional tax," he said. " We are concerned that the consultation around this issue is premised on limited options around water charging and misleading perceptions about how people here have in the past paid for their water.

"We are deeply concerned that the clear indication is that a decision has already been made," said Councillor McMullan. "We believe this current consultation must be extended to ensure that all stakeholders are included, and the views of trade unions, political parties and communities, particularly those in poverty, be given due weight in any final decisions."

Ballycastle candidate Cahal Newcombe says the case has not been made that the introduction of water charges is either justified or will lead to improvements in water services or lead to a reduction in the usage or wastage of water.