Well, it's almost over 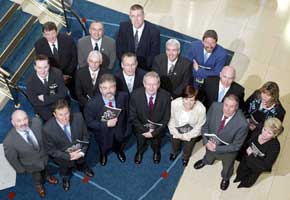 Well, it's almost over. Polling day, with its last-minute canvassing, frantic door knocking and fleets of cars ferrying voters to the polling booths, will soon have come and gone. The Westminster count begins almost immediately, while local council counts are waiting until Monday. In a few days time, all the speculation will have ended and the reality of Sinn Féin's increased electoral mandate will continue to shape the political future.

And it has been an interesting campaign. There has been the usual media attempts to undermine Sinn Féin's vote, the obligatory British securocrat stories about the IRA, spurious media-led allegations of electoral fraud, disproportionate media support for no hopers like Liam Kennedy, whose campaign we were told "was more about raising consciousness than winning votes". Well, at least he won't be disappointed.

On the ground, it has been far more fun. In West Belfast, SDLP supporters (there still are some) have been bussed in to push leaflets through the doors. They scurry in and out, trying very hard not to catch the eye of any local people, avoiding at all costs any actual contact on the doorstep. The prospect of an opening door sends them off down the street like whippets. It's become a local sport in our area. A kind of catch them if you can competition between neighbours.

By the end of the week, Mark Durkan will know if he has held onto John Hume's old seat by the skin of his teeth or, more likely, lost Foyle to Sinn Féin's Mitchel McLaughlin. The loss of this seat, in the SDLP's historic heartland, will probably end Durkan's own political career as leader, while sounding a political death knell for the SDLP as a whole.

Meanwhile, Eddie McGrady, the last of the SDLP's old guard to stand, began his election campaign as the most likely candidate to win a seat for the SDLP but ended by coming under increasing pressure from Sinn Féin's Caitríona Ruane. And even if McGrady succeeds this time round, he knows it will not only be his last term of office but also the last time the SDLP holds South Down.

With former SDLP strongholds now re-defined as "the new marginals", the party has been forced to pin its hopes on a split unionist vote in South Belfast. But while Alasdair McDonnell is technically campaigning on a nationalist ticket, his political instincts are pure unionist.

McDonnell has already demonstrated his willingness to ditch the Good Friday Agreement and, by entering into a voluntary coalition, support a return to unionist majority rule. If McDonnell emerges as the only elected SDLP MP, we may see a leadership challenge that leaves the SDLP's nationalist credentials in tatters.

But if the future of the SDLP appears precarious, the prospect for the UUP looks decidedly worse. And the demise of the UUP holds far greater significance. After all, the UUP have been the North's traditional political power brokers for decades. The party ran the Orange State for generations, presiding over sectarian exclusion and discrimination.

But with all the arrogance of those who believe they were born to govern, the UUP has increasingly lost working-class unionist support to the DUP while failing to fully mobilise a significant proportion of its middle-class electorate.

Trimble's increasing retreat into the anti-Agreement rhetoric of his political rivals appears to have alienated a sizable section of more progressive unionist voters, who supported the Good Friday Agreement and have failed to come out and vote for Trimble ever since.

Political commentators are already anticipating the scene at Banbridge Leisure Centre, when the count goes against the UUP leader. Amidst scoffing DUP supporters, they imagine Trimble going quietly, a few last words to camera, before walking into the political sunset with his only faithful supporter, his wife Daphne, at his side.

And what will be the prospect for the UUP? It's just possible that David Burnside will emerge as the party's only elected MP. Burnside has been one of the bitterest opponents of Trimble's leadership, defying him by refusing the Westminster party whip, together with Martin Smyth and Jeffrey Donaldson.

The question is, if Trimble goes and Burnside's position is secured, will that old Westminster Triumvirate re-emerge in pursuit of Burnside's stated dream of merging the UUP with the DUP?

Of course Donaldson, who began by infamously walking out of the Good Friday negotiations and ended by walking out of the UUP, has already merged with the DUP, while Smyth has already demonstrated his willingness to do the DUP's bidding by supporting a DUP candidate against his party colleague Michael McGimpsey during the current election.

But merger with its political rivals appears unlikely to be the agenda of the DUP. After all, the UUP spent years lording it over the DUP and Ian Paisley appears to be relishing the prospect of gaining the upper hand.

In his usual style, Paisley has already announced that whatever happens, Trimble faces "the electric chair and the rope", metaphorically we hope, but you can never be entirely sure when it comes to right-wing fundamentalist preachers.

There's more than a whiff of Dodge City about the Reverend Paisley. I believe the UUP refer to him as "Father Jack" of the television comedy, in recognition of his propensity for sudden, often, off-the-wall and offensive verbal outbursts.

Meanwhile, the DUP's Willie McCrea has been fully supporting the DUP position on criminality and terrorism by supporting his party's local council candidates, including a convicted former member of the UVF, John Smyth, and a friend of Paisley's, Roy Thompson, who was once convicted of fraudulently claiming sheep subsidies.

A day before polling day, the DUP were still seeking "legal advice" and therefore couldn't comment on the status of their candidate, Paul Berry. Berry, who had been caught in a hotel room with a gay male masseur, had been exposed as a hypocrite by the media, given his party's homophobic Christian teachings. Nigel Dodds repeatedly couldn't comment.

As for the two governments, the media is reporting "their worst fears to be confirmed", with likely electoral gains by what the media refers to as the "extremes", in other words Sinn Féin and the DUP. The likely outcome of the election is depicted as presenting the British and Irish Governments with an insurmountable difficulty.

On the one hand, Sinn Féin, as the largest nationalist party in the North, is extremely committed to the implementation of the Good Friday Agreement. It extremely supports equality and power sharing and inclusion and human rights and progressive change.

On the other hand, the DUP is extremely against it.

What can the poor governments do?

Now here is a small idea. Why don't they stop supporting intransigent unionism and implement the Agreement that was endorsed by the vast majority of people living on the Island of Ireland, as well as commanding the status of an international treaty.

Add to that recent opinion polls in Britain that show less than a third of the population supports the Union, almost half favour Irish re-unification and a further quarter won't oppose unification.