Leading by example on women's rights 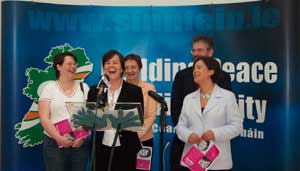 "Our message is clear, we want to build an Ireland of equals, and we recognise the vital need for gender balance, gender proofing and gender equality in the decision making process," said the South Down MLA. "Irish women are not fully represented in either national politics or in local government decision-making structures, Women make up 51% of the Irish population yet hold 13% of seats in the Dáil and 16.6% of seats in the Assembly.

"Women continue to suffer disproportionately in the workplace through unequal pay with their male counterparts, are more likely to fall into the poverty trap, suffer as a result of physical, sexual and psychological abuse and many rural women continue to be disadvantaged resulting from a lack of services and a sense of isolation.

"Sinn Féin is committed to combating gender inequality within Irish society. It is against the backdrop of cuts and the downgrading of the Women's Sector that we launch this document. We are campaigning for mainstream funding for women's groups in the community sector and for those frontline organisations providing services for women.

"These inequalities are an indictment of our society. They are unacceptable and Sinn Féin intends to work both within our party and at local, national and European levels to make the necessary changes. We are in the business of changing and challenging all of this and are well placed to bring about real change."