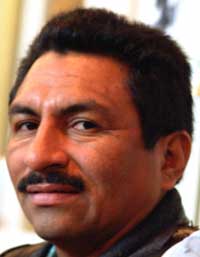 Jaime Arias is a spokesperson for the Kankuamo indigenous people of Colombia, who are paying a very high price for trying to maintain their culture and identity. In 2001, Colombian right-wing paramilitaries (AUC) tortured and killed Jaime's father, Salomón Arias, a spiritual leader. In August 2004, one of his brothers, Freddy Arias, the coordinator of human rights issues in the Kankuamo Indigenous Organisation (OIK), was also killed.

An Phoblacht interviewed Jaime during his recent visit to Ireland, at the invitation of the Latin America Solidarity Centre.

The Kankuamo, who number just about 13,000, are a symbol for the rest of Colombia's indigenous groups. This is because their culture was almost totally lost, but was revived 20 years ago when the generation started to heed their elders' call for the need to reclaim their cultural identity.

The Kankuamo live in 12 municipalities in the north of Colombia, in the Sierra Nevada de Santa Marta, where they share a beautiful territory of rainforest and snowy peaks with their indigenous brothers, the Arhuacos, Kogis and Wiwas, all members of the Tairona nation. The Kankuamo are part of the 94 indigenous peoples that survive in Colombia and were recognised as an indigenous group by the 1991 Colombian Constitution.

The revival involved a return to their traditional social structures, and they have their own government, parallel to the power structures imposed by Bogotá's administration.

The Arias family murders, however, illustrate the ruthlessness of the Colombian establishment and government when indigenous people's rights clash with powerful economic interests.

In July 2004, Freddy Arias publicly related a detailed list of the atrocities committed against his people by the right-wing paramilitary militias. He spoke out in the presence of Sergio Caramagna from Argentina, the head of the Organisation of American States (OAS) mission that is following the government negotiations with the paramilitary groups, most of which form part of the United Self-Defence Forces of Colombia (AUC) umbrella. The talks are aimed at the demobilisation of the militias.

Human rights groups say the government's talks with AUC are not a peace process but an agreement between allies that have always acted together. The AUC has been responsible for at least 80% of the human rights abuses committed in Colombia, according to the UN, Human Rights Watch and Amnesty International.

Freddy Arias was one of the driving forces behind the decision by indigenous peoples not to support the negotiations between the paramilitaries and government, which include an amnesty-like agreement. His murder was seen as retaliation for that stance.

Since the death of his brother Jaime has been threatened and he knows his activities, as main political representative of the Kankuamo, make him a target for paramilitaries. But he will not be silenced.

"What would be the value of the lives of my brother and father if I was to stay silent?" he says. "It is only real international pressure that will save our lives."

Many, including Jaime, believe the paramilitaries are just a tool of the area's economic interests, in this case the land-owning elites who want to gain control of the water resources in the Sierra Nevada de Santa Marta mountains.

During the Spanish conquest, the Kankuamo were displaced from the lowlands to the mountains and suffered a process of "civilisation", which meant the disappearance of their traditions and culture. Their language is now gone.

At the time, the hills and the mountains were perceived as the poor areas, while the lowlands were used for agricultural production. Now, the highlands are the focus of economic interest. That is why they are being forced again from their lands.

There is talk of privatising the rivers, of exploiting biodiversity and genetic resources, fancy modern terminology for an old-fashioned land grab.

Indigenous rights recognised by the Constitution do not apply when it comes to economic interests. The Colombian Government has refused to defend indigenous people from the paramilitaries.

The Kankuamo are one of the indigenous groups that have suffered most as a result of this violence.

So far, since Alvaro Uribe became president of Colombia, 90 Kankuamo have been killed, a sharp increase from the 78 people killed during the total duration of Andres Pastrana's presidency.

The Colombian state stands implicated. Paramilitaries are free to place a checkpoint five minutes away from a military base. The killers of the Kankuamo leaders walk the streets freely. This is another 'silent' genocide.

Nearly 2,000 families have been displaced, the population's access to medicines and food is restricted by roadblocks imposed by right-wing paramilitaries. With the paramilitary forces working hand in hand with the local military, the indigenous communities feel they are completely without protection. In the past, indigenous leaders who raised these issues in meetings with the government have afterwards been killed in retribution.

"As the roads arrived to our land and they start talking about the construction of dams on our rivers, the presence of right-wing paramilitaries increased," says Jaime. "What they do is 'clean' the areas where these mega-projects are going to take place to avoid any resistance by the indigenous peoples."

In 2002 and 2003 there were several investigative missions in the area, including the UN High Commissioner for Human Rights, academics, Colombian NGOs and state agencies. None of the recommendations of their reports have been implemented by the government. Nothing was done to prevent or stop the killings.

It was then that the Kankuamo decided to take their case to international human rights bodies. The Inter-American Human Rights Court has called on the Colombian Government to put in place measures to protect the indigenous people. At the beginning of April, the UN Rapporteur for Indigenous Peoples presented a report in Geneva, which includes a section voicing concern about the situation of the Kankuamo people.

"We organise all these actions to get the Colombian Government to guarantee our right to life," says Jaime.

Though the murder of Freddy Arias warranted a small mention in Colombian daily El Tiempo, no serious coverage was given to either this killing or to violations against the Sierra Nevada indigenous populations in general. Their plight is an untold and forgotten story by the mainstream press and the Colombian Government. The world's press has only covered such areas when the news involves westerners.

In September 2003, eight European and Israeli back-packers were taken hostage by the ELN in the Lost City of Tairona, high in the mountains. This was followed by the jungle escape of British traveller Matthew Scott, who was found and nursed to health by a local indigenous community.

The Colombian Government responded by deploying 2,000 troops and nine Blackhawk helicopters on a rescue mission that uncovered nothing. The media failed to cover the four killings and 20 detentions of local indigenous people by the Colombian Army, who later admitted to targeting the wrong people in their search for the kidnappers. This was the point where the media lost interest and the indigenous peoples returned to media obscurity.

Jaime notes that the number of physical attacks against the Kankuamo has fallen in the last year, but says this is due to a new strategy. Under Uribe's 'democratic security' policy, the Sierra Nevada has suffered a militarisation process and the security forces have created a network of collaborators which is being used to carry out mass detentions.

Kankuamo leaders have been interned and are being charged with rebellion for organising a demonstration to protest the detention and illegal execution by the army of another member of the community. The role of the collaborators is to give cover, through their testimony, to the illegal detentions.

"We are facing a policy of persecution because we oppose the economic development model being fostered by the government," says Jaime. "The establishment is using the legal system and paramilitarism to ensure that their project goes ahead. We have cases tying the murder of indigenous people to the construction of dams or the extraction of oil. The government's argument to justify these murders is that the general interest should always prevail.

"In Colombia, it is not possible to protest this, because that makes you a dead man walking."