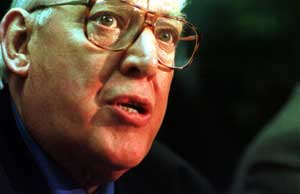 WHERE, OH, WHERE IS DUP leader Ian Paisley on the telly?

It's now traditional for DUP handlers to keep Papa Doc off the airwaves in case he has one of his uncontrolled explosions of forthright views that might disturb would-be voters. But to avoid claims that he is under sedation in some DUP secure facility, the DUP do let him have a run-around in DUP safe areas and at photocalls. And it was at the unveiling of the DUP's 'battle bus' this week that Papa Doc demonstrated why he's only allowed on the telly with the sound off.

"I say this is a time of reckoning," the fire and brimstone preacher man thundered, before giving his vision that UUP rival David Trimble's days are numbered. "What he is just counting is the time to the electric chair and the rope."

The movie stars Martin Freeman (of The Office) as Arthur Dent, the reluctant, space traveller in a dressing gown, Mos Def, Sam Rockwell, Bill Nighy, John Malkovich and Zooey Deschanel. But the scriptwriters behind Douglas Adams's surreal space odyssey confessed that they drew on the DUP leader to help them illustrate central characters in the movie, the Vogons.

No luvvy lost in East Derry

Musical-mad McClarty has acted up as The Mikado in the Ballywillan Drama Group's production of The Hot Mikado, Fagin and Mr Bumble in Oliver, Emile de Becque in South Pacific, Jud Fry and Ali Hakim in Oklahoma and Captain Von Trapp in The Sound of Music.

Asked how he would cast his DUP rival and drama queen, Gregory Campbell, McClarty snorted that he'd make Gregory the baddie Bill Sikes from Oliver. "Bill Sikes took a lot of advantages and never gave anything in return."

ONE CANDIDATE tipped to run for the Ulster Unionist Party grabbed the headlines this week when his latest run was as part of the Linfield soccer hooligans' pitch invasion and riot with Glentoran supporters at the Oval Stadium in East Belfast.

Orange Order official David Hall (35) had been on the list of potential UUP candidates for Antrim Council. But after the Glens' last-minute 3-2 defeat of Linfield in their Irish League match decider at the weekend, Hall was snapped by photographers among the hordes of Linfield followers who broke through a security gate to hurl bottles, bricks and stones into the Glentoran stands. Then Glens' fans stormed onto the pitch and hand-to-hand fighting ensued. The News Letter described the scenes as "the worst soccer violence in years".

Hall was pictured in the pitch battle but says his conscience is clear and he wasn't rioting.

So why was he on the pitch? He says he went to get his flag back!

I'm too big for you

The rough and tumble former seaman took exception to being questioned by a reporter from the South Wales Argus about a rebel Labour Party candidate while Punchy was electioneering for the official New Labour Blairite runner.

Prescott is renowned for his last general election performance, when he punched an egg-throwing protestor in the face, so it's understandable that reporter Mark Choueke was a bit uneasy when Prescott turned on him and ordered him to "bugger off — get on your bus, you amateur!" after earlier telling him:

"Why are you asking me about this? I don't care. It's a Welsh situation; I'm a national politician."

And here is some of the news from RTÉ...

AS WE reported last week, David Trimble's UUP postponed their media launch after the home and office of their East Belfast candidate, Michael Copeland, was raided by the PSNI in connection with alleged money-laundering linked in the media to the arrest of deposed UDA gangland boss Jim Gray.

When the launch was eventually held, RTÉ's Northern correspondent, Tommy Gorman, helpfully reported that the launch had been postponed because one of Trimble's candidates — whom he didn't name — "got caught up in a police investigation".

Now if it had been a Sinn Féin candidate...

Gerry Kelly and Danny Lavery on the canvass trail in North Belfast last week, followed by the usual gang of local kids. The perennially youthful Gerry calls out to Danny from across the street, whereupon the childer, mishearing, run over to Lavery, asking "are you his daddy?"

It may not be true but it's a good yarn.