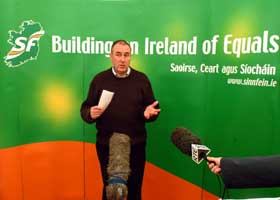 The party's Irish language policy is aimed at creating a bilingual society at every level. The objective is to allow the people to reclaim their language. This document sets out practical ways of doing this across a number of key areas - legislation, broadcasting and youth and social provision. Sinn Féin believes that the Irish language in the Six Counties needs strong legislative protection in line with that in the 26 Counties.

Among Sinn Féin's proposals are:

• The introduction of an Irish Language Bill for the north which will give Irish speakers at least the same rights as those on the rest of island.

• The rights of the Irish language speakers to be recognised, protected and promoted in both the proposed Human Rights Bill and the Single Equality Bill.

• The creation of a Commissioner for the Irish language in the north.

• The development of an all embracing programme of language classes as an integral part of the education curriculum.