SDLP and UUP battling for survival 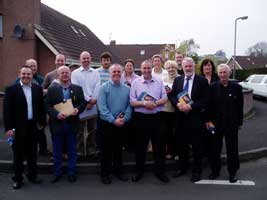 In previous elections, the DUP had given the UUP's Ken Maginnis a free run and in 1997, the last time an agreed unionist candidate ran in the election, he won 51.48% of the vote. This time around, all is changed; the DUP and UUP are both contesting the election, with a growing split in the Orange Order over the election.

The UUP loss in 2001 was driven partially by the candidacy of Independent Unionist Jim Dixon, who ran on an anti-Agreement platform. Dixon won 13.17% of the poll.

So in 2005, we have an electorate divided not just between the four major political parties but fairly equally between nationalist and unionist voters. Holding the seat for Sinn Féin a second time would be an incredible performance for the party but one that Michelle Gildernew is confident she can achieve..

What has made the election more complicated to analyse is a growing dispute within the Orange Order. Robert Saulters, the Grandmaster of the Order in Ireland has backed the DUP's Arlene Foster in the election even though the Ulster Unionist candidate Tom Elliott is a senior Fermanagh Orangeman. This vote will be one to watch, not just to see if Sinn Féin can pull off the double, but also to gauge the state of play in the rural unionist vote.

This constituency is the most likely to produce a Sinn Féin gain. The party vote share has been rising here in consecutive elections and in the 2003 Assembly elections the Sinn Féin vote share jumped nearly 14% to 39.79%, leaving the SDLP trailing as the party contested its first election here without the presence of outgoing MP Séamus Mallon.

Mallon had held the seat first won in 1986 with 37.37% of the vote in 2001. MLA Conor Murphy is the Sinn Féin candidate. He won 30.94% of the vote in 2001 and if the party can maintain the lead established in the 2003 elections, where it won three Assembly seats compared to the SDLP's one, Sinn Féin will have a new MP. MLA Dominic Bradley is the SDLP candidate.

This constituency could provide one of the upsets of the election should UUP leader David Trimble lose his seat. In 1997, Trimble comfortably held the seat, with 43.6% of the vote, his nearest challenger being the SDLP'S Brid Rogers on 24.24%. Now all is changed utterly and Trimble's majority has been eroded over successive elections.

In the 2003 Assembly elections, the UUP majority was further cut. The UUP still held sway with 29.41% of the first preferences compared to 28.52% for the DUP. Given the prevailing mood within unionism and Trimble's own questionable leadership position the DUP-UUP rematch could meant the end of Trimble at Westminster.

Sinn Féin will look to consolidate its position as the third largest party in Upper Bann. In the 2003 elections, Sinn Féin had 21.83% vote share, compared to 15.68% for the SDLP. MLA John O'Dowd is the party's candidate and the SDLP is running Dolores Kelly, who was also elected in the 2003 Assembly elections.

In this election, you have to rip up the form book, as for now it is impossible to figure out how much of Anti-Agreement Jeffrey Donaldson's UUP votes will stay with him now that he is contesting the election as a DUP MP.

In the 1997 and 2001 elections, Donaldson as UUP candidate was clocking up over 55% of the votes, compared to approximately 13% for the DUP.

Even before the Donaldson defection, the DUP were catching up on the UUP. In the 2003 Assembly elections, the UUP took 46.22% of the vote, compared to 20.54% for the DUP. This time around, Donaldson could make the difference for the party.

This is another battleground constituency, as the SDLP's Eddie McGrady tries to hold onto his Westminster seat, first won in 1987. McGrady, who will be 70 in June, is the last of the SDLP old guard to stand for election, as Hume, Mallon, Rogers and Hendron have all bowed out.

This latest election campaign has been made all the more contentious after a leaked NIO memo written after a meeting in McGrady's home in 1994 cites him as being critical of the Hume-Adams talks and describes republicans as "scum of the earth".

This time around, Sinn Féin's Caitríona Ruane will be trying to bridge the gap of 3,000 votes between the parties and win the seat.

Dermot Nesbitt is running for the UUP and fellow Assembly member Jim Wells is the DUP candidate. This is one of the few constituencies where the DUP have failed to eat into the UUP vote.

This is one of the DUP gains in 2001, when Iris Robinson won the seat from the UUP's David McNarry. McNarry had tried to hold the seat won by John Taylor in 1983.

In the 2003 Assembly elections, the DUP cemented their lead over the UUP here by winning three Assembly seats with 47.94% of the poll. Gareth McGimpsey is the UUP candidate this time around.

Dermot Kennedy is the Sinn Féin candidate; he polled 1,105 votes here for the party in 2003.