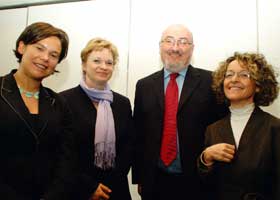 "While doing some research for this conference I came across a series of recommendations on childcare made by the ICTU 25 years ago this month," reported Barbara Keogh of the Irish Congress of Trade Unions.

"There have been improvements since then, but affordable and accessible childcare is still a major problem for thousands in Irish society."

Barbara was speaking at a conference on childcare provision in Europe in the AXIS Centre in Ballymun, Dublin, last Saturday. Organised jointly by Sinn Féin Átha Cliath and the party's affiliate group in the European Parliament, United Left, the conference was a continuation of the party's campaigning on an issue identified as key for working families and single mothers.

The conference was opened by local Sinn Féin Councillor Dessie Ellis, who made clear its aim. "We realise that Sinn Féin alone cannot push the agenda for change in childcare in this country, and we certainly know that we do not have all the answers," he acknowledged. "The purpose of today is to inform and educate ourselves as much as to bring experts in the field together."

As well as international and Irish speakers, the conference was attended by dozens of local crèche workers and managers, with a wealth of experience in dealing with childcare provision in some of the most disadvantaged communities in the state.

Speaking on behalf of Sinn Féin TDs, who introduced a comprehensive motion on Childcare before Christmas, Caoimhghín Ó Caoláin pointed out that a study on Childcare by the National Economic and Social Council made depressing reading.

"The study uses a points system and assesses each state's childcare supports for families with two parents working and it compares all 15 pre-enlargement EU states," Caoimhghín explained.

"Denmark is placed at the top of the class with a score of 88.45. Finland comes in third with 56.69 points. Italy is an example of a middle ranking country on 35.66 points.

"And what about poor old Ireland? You've guessed it. We get the wooden spoon again, coming in last of the 15 states with a pathetic 5.64 points. And this is even worse when you consider that the second worst scoring state, Spain, has 18 points."

A number of these experts had travelled from Europe to address the conference and point to their experiences of the benefits of sustained investment in childcare.

Finnish speaker Anne Huotari, a Left Alliance MP, took the audience through the structures and characteristics of a childcare system that sees a staggering 96% of children go through daycare and preschool. The Finnish state also provides a Child Homecare Allowance of €294.28 a month, over twice the rate of Child Benefit in the 26 Counties.

Italian speaker Sandra Piccinini outlined the history of the community-based childcare group of which she is President in Reggio Emilia.

The project began when the local community came together in the aftermath of World War II and sold abandoned tanks to fund the rebuilding of the town. After a vote in the community, the first structure they decided to build was a childcare facility and the entire population came together to build it with their own hands.

As Sandra pointed out: "One of the arguments advanced against investment in childcare is that there is never enough money. Here we have a devastated Italian town in the aftermath of World War II finding the money and prioritising childcare. If it can be done in such economically difficult times as those, it can certainly be done today."

Orla O'Connor of the National Women's Council of Ireland argued that childcare in Ireland is not expensive, no childcare providers or workers are getting rich, but simply that the level of State subsidisation is too low.

Welcoming the initiative of holding the conference, she applauded the "commitment of Sinn Féin to working with us to bring about the radical change in childcare that is needed in Ireland".

MaryLou McDonald MEP thanked all the Irish and European guests for participating in what she described as an "interesting, informative and much needed conference."