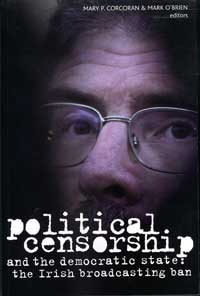 Political Censorship and the Democratic State: The Irish Broadcasting Ban

When Gerry Adams welcomed RTÉ to the democratic process at the 2003 Sinn Féin Ard Fheis, he was not merely commenting on the fact that it was the first Ard Fheis to be televised live. He was also reminding those present of a time when the republican community was censored from broadcasting in Ireland under Section 31 of the Broadcasting Act.

Mary Corcoran and Mark O'Brien have put together a collection of ten contributions from academics, politicians and journalists assessing the impact of Section 31 in Ireland and the broader issue of broadcasting censorship.

The only voice clearly articulating support for Section 31, then and now, is that of Conor Cruise O'Brien, whose speech to the Seanad in 1975 re-defining the workings of Section 31 should be read by supporters of free speech anywhere. It exposes the authoritarian attitude of the southern state at the time and while probably one of the most coherently argued calls for press censorship in Ireland, is both contradictory and dishonest.

O'Brien says nothing about his vendetta against print journalists, nor his file on people who wrote letters to the Irish Press, both incidents pointed to by other contributors. And his claim that there was no serious danger that republican propaganda would "cause the citizens of the Republic to engage in widespread violence" sits uneasily with his belief that the people needed to be "protected" from the same propaganda.

One excerpt from his speech suggests a more honest explanation for his position when he claimed that the press in Ireland "has on the whole turned its critical attention more closely on the faults of the state than on the forces who threaten it". The media was, in O'Brien's opinion, not aggressive enough in taking on those people opposed to the southern government and not obsequious enough to the government (and himself as Minister) and so needed to be dealt with.

Colum Kenny, while opposing Section 31, attempts to suggest that there "was massive political support across the spectrum for Section 31" but defines political support in an elitist and exclusionary manner by pointing to the positions of the major Opposition parties. As Mary Corcoran in her contribution points out, over half the general public opposed the ban in the late '80s and nearly 75% believed Sinn Féin should be allowed express its opinions on RTÉ.

Kenny also attempts to play down the influence of the Workers' Party in RTÉ and the issue of self-censorship within the organisation itself. Other contributors such as Farrel Corcoran, Ed Moloney and Helen Shaw are very clear on the serious and co-ordinated role played by the Workers' Party in RTÉ, and on the presence of a significant level of self-censorship. As Helen Shaw put it: "The amount of energy that went into policing the ban meant many programme makers avoided Northern Ireland because it was trouble and time-consuming... In many ways Section 31, and indeed the lack of a campaign against it within the Irish broadcast industry, showed that self-censorship was as powerful as state censorship."

There is an interesting comparative examination of the role of the British media's approach to similar broadcasting restrictions. Ed Moloney points out that despite having been able to challenge Section 31 in Europe since 1973, "it was only in 1988, when the British Government imposed formal censorship on its own broadcasters and the British section of the NUJ decided to go to Europe, that the Irish section of the union was shamed into stirring itself... Even then, the NUJ found it impossible to persuade any Dublin or mainstream electronic journalist to file an individual complaint."

Other notable contributions include a straightforward and concisely written piece from Alex White outlining the legal history of Section 31 and from Michael D Higgins, who as Labour Minister refused to renew the legislation in 1994. It is interesting in these times that he points to Michael McDowell as one of the more vociferous opponents of free speech. McDowell moved a motion in Leinster House to attempt to force the government to continue the operation of Section 31 following Higgins' decision.

Indeed, anyone fooled by the notion that Section 31 belongs to the past could do worse than read some of the debates from only just over ten years ago and the arguments in favour of it put forward by people who are still leading political figures in this state.

The book's major weakness, however, is the omission of any republican point of view from the collection of essays. Ironically, a book focusing on the censorship of a specific political analysis in Ireland gives no space to a representative of that community to articulate the experience of censorship. It is a curious, and unexplained, omission that significantly undermines its comprehensiveness.

At times the book is a little repetitive, with specific controversies around the firing of RTÉ journalist Jenny McKeever and Larry O'Toole's court cases being detailed numerous times by different contributors. Tighter editing could have dealt with this.

Republicans who experienced Section 31 will find little new here but the book would serve as a useful introduction to censorship in the South for younger republicans or those with an interest in the Irish media.

At 138 pages and almost €25, it is certainly not cheap, but does serve a useful purpose in bringing together a range of opinions and analyses on a time and a practice that the State, RTÉ management and in particular, Irish journalism, would rather forget.