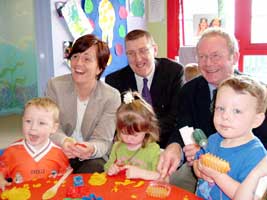 Caitríona Ruane, John O'Dowd and Martin McGuinness with children from the Whiterock Creche

There should be universally available, publicly funded pre-school education for all children from the age of three to five years, Sinn Féin MP Martin McGuinness said, as he launched the party's Children's Charter in Belfast on Tuesday.

Accompanied by MLAs Caitríona Ruane and John O'Dowd, McGuinness visited the Whiterock Crèche in Belfast to launch the pre-election document.

"Children's services have been underfunded for a number of years," he said. "While there were some improvements while the Assembly was in session, including the appointment of the Commissioner for Children and Young People, and the development of a ring-fenced Children's Fund, the situation for children's services has deteriorated seriously since the imposition of direct British rule.

"By failing to provide adequate funds, the British Government is putting children's services at risk. Most recently, we have witnessed the cutbacks within the Education and Library Boards, against the advice of the Commissioner, those in the education sector and parents. These cutbacks cannot be justified and are in stark contrast to British Government proposals to recruit thousands of teachers for England, Scotland and Wales.

"This approach can also be seen in the disgraceful decision to eliminate the Children's Fund. Sinn Féin believes that this decision should be overturned and funding for children and children's services should be ring fenced.

"As a party we are determined that the rights of children remain centre stage and that is why we are launching a Children's Charter as a centrepiece of this election campaign."

• Full details of the party's children's charter are available online at http://www.sinnfein.ie/ news/detail/9336