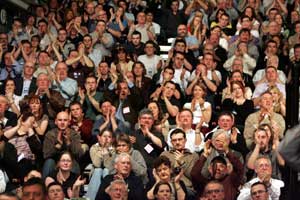 At this year's Ard Fheis, as with the year before and most assuredly the year to come, the debate around the gerrymandering, for that is what it is, of Ard Chomhairle elections was one of the dominant features of the party's discussions.

For the second year in a row, the six seats on the Ard Chomhairle reserved for women comrades were only just filled, though not without some serious arm-twisting. The argument that a quota system was needed for the party because of an internal bias against women in leadership positions was again unproven.

Indeed, the negative effect of the system could be seen in the declaration of one speaker that she had refused to stand for the Ard Chomhairle because of the gerrymandered electoral process.

The argument that the membership of Sinn Féin is structurally and institutionally sexist has simply not been proven; indeed, evidence to prove this has never been presented.

While only six women contested the Ard Chomhairle elections this year, 27 women activists were nominated for positions and turned them down. The problem is not a lack of support among the membership for women going forward, but a lack of focus on why these women decided not to go forward and on what supports could be put in place to encourage them to come forward in the future.

Instead of dealing with this more complicated, yet more accurate, presentation of the problem, gerrymandering was presented as the panacea to our problem of gender inequality.

Opponents of the measure argued at Ard Fheiseanna that the quota system was a cosmetic change, one that would allow the party to feel good about itself, to point to this as an example of its commitment to equality and then forget about it.

While these arguments were rejected at the time and the new system was introduced, they have been vindicated by the experience of the last two years.

At the time the membership agreed to the proposed election change, there was a fully functioning Equality Department in the party, headed up by Lucilita Breathnach, doing a great deal of good work. For the last two years, however, it has existed only on paper and in theory. The work that needs to be done in attracting women to the party, and in encouraging women to come forward, has not been done.

At a recent meeting of a number of women activists interested in restructuring the Equality Department, one young comrade related that she had been taken aback to be seriously asked if she would be interested in being a local election candidate for the party at her first interview with the local representatives.

In a different situation, another young comrade, less than three months into the party and yet to complete the internal education process, was flabbergasted to be told by a full-time official that if she had any interest in being a candidate she should put her name forward and it would be easy for her to get the nomination.

The merit of either woman for such a position is unquestionable, but both found themselves being offered local election candidacies with little or no preparation.

The drive for women candidates and to put women comrades forward can oblige party representatives at local and regional level to put pressure on women to take positions of responsibility before they feel ready. This in turn can lead to feelings of frustration when women comrades are approached and turn down requests to take more senior positions, regardless of the explanation. It can also lead to unsuitable candidates being approached because a party official needs to fill a quota.

At local and regional level within the party, the need to profile and push women comrades forward has, largely, been responded to. Cúigí and Comhairlí Ceantair have plans in place to bring women activists into more public roles. The leadership has been unceasing in its determination to give space to women to grow in the party.

This is not to say that everything is perfect in the party, that comrades correct every sexist statement and outdated views are always challenged, but there is not sufficient evidence of sexism to rig our electoral system. In reality, there never was.

The gerrymandering of Sinn Féin's internal democracy has failed in its objective, in part, because its objective was never clearly defined. Supporters argue that we will eventually reach a point when we do not need this system anymore, presumably because a glorious era of gender equality will have been ushered in.

When? And what review mechanism is in place to ascertain when we have reached that point? How will we know when we have 'evolved' beyond the need to have our electoral process rigged? What criteria are in place to make this judgment and who makes it?

In the meantime, we have an electoral system to the Ard Chomhairle that encourages our members not to vote for women candidates.

Why should a delegate to the last Ard Fheis have voted for a woman comrade, regardless of how qualified she is, when the presence of only six candidates meant that all of the women were going to be elected? Why vote for people who are already elected?

This is not an argument against the principle of quotas. In institutions or organisations that are institutionally biased against a minority, such as the PSNI, for example, then there is a place for quotas.

But in a party like Sinn Féin, where there is no evidence of such a bias and a great deal of evidence to the contrary, especially at local and regional leadership levels, is it necessary? And if the evidence does exist, why was it never presented? Can it yet be presented?

Our problem rests on two key issues, neither of which have anything to do with Ard Chomhairle elections. Firstly, the lack of women members in the party and secondly, their reluctance to come forward, despite encouragement to do so.

Is the reason women are not coming forward not due to the lack of women in the organisation in the first place and is this not where we should be focusing our efforts?

Does anyone seriously think that rigging our Ard Chomhairle elections to ensure six female members are elected will attract women to the party?

And is the reason women members are not going forward for election because there is a vast internal conspiracy within the party to prevent women candidates? The push for women candidates is sustained and aggressive within the party, due in no small part to the work of the Equality and Elections Departments and the party's local and regional leadership.

Surely there are other reasons women are not coming forward, such as lack of support structures, the role society has forced on some of them as the primary family caregiver, a lack of confidence or the internal mechanisms of the party, with meetings at weekends.

Recently, a meeting of the Ard Chomhairle in Dublin began at 11am on a Friday and lasted until after 4pm. How is this suitable for anyone who is not full-time for the party, or flexible in their working arrangements, let alone for women comrades, who often have greater family commitments?

This is not an argument that there is no gender problem in Sinn Féin, nor that there is not a great deal of work to be done. But by rigging our elections, we are tackling an imagined symptom of the greater problem, our lack of women members, at the expense of our democratic structures.

Next year, the membership will have the opportunity to restore democracy to the party's internal election process and I hope it takes the opportunity. More importantly, I hope the party leadership shows the way by re-establishing and funding the party's Equality Department and directing our efforts on the problem, not on cosmetic photo opportunities.