We need solutions, not gimmicks - Establishment parties rally around ASBOs 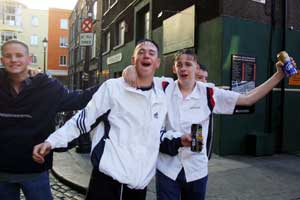 Both the Labour Party and Fine Gael showed the true vote-grabbing motivation behind their party policies once again this week, by coming out in support of Minister for Justice Michael McDowell's plans to introduce ASBOs into the 26 Counties.

The so-called caring coalition intends to fully back the Anti-Social Behaviour Orders, which can be used against anyone over the age of ten. It's believed the parties hope ASBOs will be welcomed in working-class areas affected by crime, areas where Sinn Féin has built credible support over the last few decades.

McDowell told the Dáil last February of his plans to bring in the orders by amending the Criminal Justice Bill 2004.

ASBOs have been in operation in Britain since 1999 and the Six Counties since 2004. They have provoked outrage from the children and community sector organisations there and in the 26 Counties a Coalition Against ASBOs has already formed. This coalition represents more than 70 community agencies and human rights groups, and is being co-ordinated by the Children's Rights Alliance and the National Youth Federation, who warn that the measures will "criminalise the poor".

Diarmuid Kearney of the National Youth Federation has described ASBOs as an "extreme" measure, which would have human rights implications for the entire community.

To date, the media has been largely uncritical of the orders, buying into, as have the establishment parties, the line that ASBOs will curb anti-social behaviour.

Sinn Féin took a position of opposition to ASBOs in June 2004, after the British Government imposed them in the North under the Anti-Social Behaviour (NI) Order 2004.

According to the party's Dáil Justice spokesperson, Aengus Ó Snodaigh, this decision was taken primarily on the basis of human rights concerns, and in response to lobbies received from the children's rights sector.

"Sinn Féin has been challenging anti-social behaviour in our communities for many years," Ó Snodaigh said on Wednesday. "I was recently punched in the face by a joyrider I confronted in my own constituency. We've been promoting proposals to stop anti-social behaviour for years. While we don't agree with Michael McDowell's proposals, we are glad that all the other political parties are finally waking up to this problem."

Ó Snodaigh said that after being in operation in Britain for six years, there was clear evidence that ASBOs didn't work. "Anti-social behaviour has not lessened as a result of the orders being introduced," he said. "A British Home Office review revealed that 36% of ASBOs were breached within a year — some of them up to five times. This shows us that we need solutions, not gimmicks."

The Dublin TD added that much of the problematic behaviour identified by ASBOs is actually criminal, and Gardaí are needed to consistently enforce existing laws.

"Where the reason for lack of enforcement is inadequate Garda resources, or misallocation of resources, this needs to be redressed systematically," he said.

Ó Snodaigh also called for the Garda Síochána to be made accountable to the communities they serve, through the introduction of an effective formula such as the Community Policing Partnerships at District Level, proposed by Sinn Féin.

This, he said, should come into line along with proper funding and support for the Probation and Welfare Service, designed to prevent re-offending and supervision of offenders returned to the streets.

"It's important too that we get a proper Mental Health Care service, so that the mentally ill get treatment rather than coming into conflict with their neighbours and the law," he said.

• As they apply in Britain and the Six Counties, Anti-Social Behaviour Orders are civil orders dealing with non-criminal behaviour, which "causes harassment, alarm and distress".

• ASBOs are open-ended orders made by the court, which restrict the actions and behaviour of the individual concerned. The court has total discretion in dictating the conditions of the orders.

• ASBOs can be obtained with a lower burden of proof, and hearsay, because the rules of evidence and procedure do not apply. Yet, breach of an ASBO is a criminal offence punishable by imprisonment. ASBOs have therefore resulted in imprisonment for non-criminal behaviour, without the benefit of a trial.

• ASBOs almost always relate to criminal conduct. They are increasingly being used instead of criminal charges because they by-pass the criminal prosecution process, with all its safeguards.

• Such imprisonment usually applies to offences for which the maximum penalty is normally a fine.

• ASBOs do not usually stop the perpetrators of anti-social behaviour, who just move on from one area to another.

• ASBOs can impact adversely on innocent family members who are not subject to the order (via eviction, for example).

• ASBOs are most frequently used against young people, people with mental health problems, and are open for abuse against immigrants.

• ASBOs are contrary to children's rights and if implemented in the 26 Counties, would be contrary to the Children's Act 2001. They are also inconsistent with human rights standards of due process and the right to a fair trial, as defined in the 1937 Constitution and the European Convention on Human Rights now part of domestic law.

• The full implementation of the Children's Act 2001

• Where the behaviour involved is disruptive but not criminal, a community mediation service for conflict resolution.