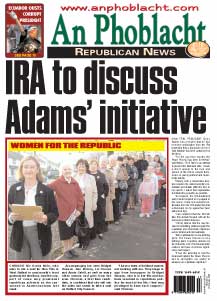 Sinn Féin President Gerry Adams has revealed that he has received confirmation from the IRA leadership that a discussion on his 6 April initiative has been authorised by the Army.

"For the past four months the Peace Process has been in freefall," said Adams. "On 6 April, in an attempt to prevent this backward slide, I made a direct appeal to the men and women of the IRA to commit themselves to purely political and democratic activity.

"Clearly, such a momentous decision requires the widest possible consultation and debate within the IRA. In my speech, I asked that organisation to initiate this as quickly as possible.

"I am confident that the IRA will take this debate forward with all the seriousness that it deserves.

"I firmly believe that the way forward is by building political support for republican and democratic objectives across Ireland and internationally.

"It has the potential to halt the downward spiral in the Peace Process and to strengthen our ability to advance our republican objectives."