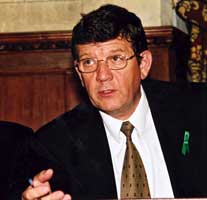 Hundreds of Sinn Féin supporters are expected to attend a major pre-election rally in Carrickmore this Sunday evening. The event is also aimed at celebrating the 100th anniversary of Sinn Féin's formation and will feature historical pageantry, music and song, and a keynote address from Party Vice President and West Tyrone MP Pat Doherty (above).

Speaking ahead of the event, local Sinn Féin MLA Barry McElduff extended an invite to supporters of Sinn Féin throughout Tyrone to "take a short while out from busy campaigning to join with us in celebrating a remarkable anniversary and in looking to the future".

The public rally will commence at 8.30pm and is scheduled to last an hour and half. Also present will be Sinn Féin election candidates from the four District Council areas which go to make up local government in County Tyrone.