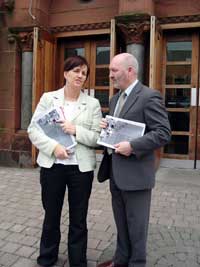 The rights of those seeking full equality in our society are being consistently undermined by policy makers and by Direct Rule British Ministers, said Sinn Féin's Caitríona Ruane at the launch of the party's Equality platform on Wednesday.

The party's Equality, Human Rights and Women's spokesperson and South Down Westminster candidate, said that "more than 35 years after the Civil Rights Movement launched its campaign to highlight the nature of structural discrimination in housing, voting and jobs, these same issues remain at the core of continued inequalities."

According to latest statistics, nationalists are:

• More likely to suffer from poverty

• Less likely to be in employment

• More likely to be unemployed

• More likely to be among the long-term unemployed

35 years later we are still evidencing these same patterns of inequality," she said.

"Sinn Féin wants an end to second class citizenship and an end in the mindset of policy makers who, despite equality legislation and equality mechanisms like the Equality Commission, pay lip service to eradicating poverty and undermine the equality agenda."

"The tax system is fundamentally unjust and biased against those on low and middle incomes. It does not raise enough tax overall to pay for effective public services," he said.

"It is essential to reform and re-weigh the taxation system in favour of the low paid and to increase the overall tax take by targeting wealth, speculative property and corporate profits to fund improved social provision."