TD says parents must be with children 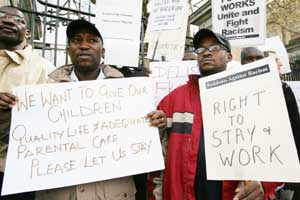 Sinn Féin spokesperson on Justice, Equality and Human Rights, Aengus Ó Snodaigh TD has called on the Minister for Justice to make "an explicit commitment that no Irish child will be deprived of the care and company of their parents as the result of a deportation order made by him".

Ó Snodaigh raised the issue in the Dáil on Tuesday after a protest was held at the gates of Leinster House by the Residents Against Racism against the policy of 'fast track' and mass deportations to Nigeria and in support of more than 70 Nigerian fathers of Irish children who commenced a hunger strike in protest last week.

"No parents of Irish children should be forcibly removed from this country," he said. All Irish child citizens must have the equal right to remain in their country of nationality in the care and company of their parents."