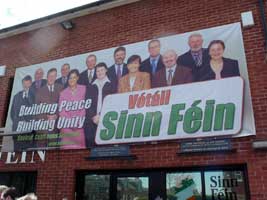 It is highly likely that this will be Peter Robinson's seventh successful election in East Belfast. He won the seat in 1979 and has held it against all comers ever since.

In 2003, the DUP-UUP gap was smaller; the DUP took 39.18% of the vote compared to 33.11% for the UUP, with the Alliance falling to fourth place, behind the PUP. The big two unionist parties have been pulling support away from their PUP and Alliance rivals. This trend is likely to continue but even MLA Reg Empey will be unable to halt Robinson's seventh term at Westminster.

If ever the word 'battleground' could be validly used in an election context, it would apply to North Belfast. The 1996 Forum elections highlighted the narrowest of gaps between Sinn Féin, the DUP, UUP and the SDLP in this constituency. The closeness of support was replicated in 1998, with Sinn Féin, the DUP and SDLP all on a 21% vote share.

This time around, the challenge for Sinn Féin is to close the gap on Dodds while maintaining the widening gap they have opened up between themselves and the SDLP.

This was a breakthrough constituency for Sinn Féin in the 2003 Assembly elections, with Alex Maskey nearly doubling the Sinn Féin vote to 12.55% and winning an Assembly seat also.

The SDLP's Alasdair McDonnell is running again. The DUP candidate is Jimmy Spratt, who has had a 30-year career as an RUC officer and is also chairperson of the Police Federation. Martin Smyth is retiring from Westminster and the UUP is replacing him with MLA and former Assembly minister Michael McGimpsey.

Smyth had made a lot of ground on his anti-Agreement stance and being a former Grandmaster of the Orange Lodge, McGimpsey might find this a hard seat to hold onto and with council elections the same day, this seat could be up for grabs!

Sinn Féin's longest serving MP, Gerry Adams, is hoping to make a hat trick of wins after consecutive election victories in 1997 and 2001. This will be Adams' sixth time to contest the seat he first won in 1983, held in '87 but lost to the SDLP's Joe Hendon after tactical voting by Shankhill loyalists in 1992.

In the 2003 Assembly elections, Sinn Féin won 65% of the vote, again the highest share of votes for any party in any of the 18 constituencies; it also won the party four of the six Assembly seats.

Dianne Dodds, who was elected a DUP MLA here in 2003, is running again for the party. The DUP took 7.74% of the vote in 2003 and will be set to press home their lead over the UUP's Chris McGimpsey.

There were only 128 votes between the UUP's Roy Beggs and the DUP's Sammy Wilson in this constituency in 2001. The two parties had vote shares of 36.39% and 36.04% respectively. There has always been animosity between the two parties' local organisations after Beggs narrowly won the seat by 367 votes in 1983 and then got to hold it in two subsequent elections because of a UUP/DUP head office pact that didn't have much local DUP support.

Beggs and Wilson are set to run off again this time around, but the seat could be a DUP gain if you consider that the 2003 Assembly elections put the DUP at 34.13% compared to the UUP's 28.70%.

This was a scalp for the UUP's Sylvia Hermon last time around, who ended decades of independent unionism led firstly by James Kilfedder and then by the outspoken Robert McCartney (the Kilroy Silk of Irish politics?).

It was a different scenario in the 2003 Assembly elections, with the UUP still holding sway but with only 32% of first preferences, virtually unchanged on the 1998 election. The DUP jumped a massive 16.61% to 23.50% of the vote, pushing the UKU into third place. The other big losers in recent years have been the Alliance Party, who have lost votes here in consecutive elections.

This could be one of the few constituencies that the UUP hold this time around, even though the UKU are not standing, giving Peter Weir, a former UUP MLA who defected to the DUP, a clear run against Hermon.