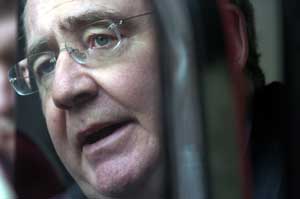 On Saturday, Pat Rabbitte was in Derry in support of Mark Durkan

It's election time and it is becoming more apparent what party is setting the pace and threatening the status quo. At the beginning of last week, the Fianna Fáil Minister Dermott Ahern was in South Down in support of Eddie McGrady. On Saturday, Pat Rabbitte was in Derry in support of Mark Durkan and on Monday Michael McDowell was in Belfast in an attempt to boost the campaign in South Belfast for Alasdair McDonald. And I have no doubt that Fine Gael will be here in the coming days and weeks.

What all three of these constituencies have in common is a robust Sinn Féin challenge to what has been considered up until now a strong SDLP base. The Sinn Féin candidates, Mitchel McLaughlin, Caitríona Ruane and Alex Maskey, are recognised as dedicated, effective leaders in a strong collective leadership widely acknowledged as a progressive force for change in an ever-changing Ireland.

I hope that the voters in Foyle will recognise that the election of Mitchel McLaughlin will dramatically accelerate the prospect of finally seeing the Good Friday Agreement implemented. It will certainly apply further pressure on unionist parties to accept that the game is up and that it is now time for them to make peace with the rest of us. The fact that the SDLP has had to call on the assistance of all of Sinn Féin's political opponents in the South to fight our party's challenge shows how much the SDLP and their friends are struggling to stem the growth of support for Sinn Féin.

It is ironic that a party that claims to be socialist sees no contradiction in aligning itself with Michael McDowell, one of the most right-wing politicians in this country, in a desperate attempt to boost its chances of getting elected.

The constituency in which this alliance of post nationalists is most interested in of course is Foyle, where Mitchel McLaughlin is poised to win the seat at the Westminster election. You will see that Pat Rabitte is only the first partitionist party leader from Dublin who will be in this constituency in the course of the campaign.

If anyone is foolish enough to believe that all of this assistance from Fianna Fáil, Irish Labour, the PDs and probably Fine Gael is simply designed to help the SDLP, they should think again.

This concerted effort is not a benevolent gesture to help a beleaguered party; it is a desperate bid to stop the continuing rise of Irish republicanism throughout the country and the journey towards Irish unity and independence. It is as much about protecting their own political fortunes as it is about shoring up the flagging support for the SDLP.

Neither Pat Rabitte nor Michael McDowell has ever lifted a finger in defence of the rights and entitlements of northern nationalists. In fact, McDowell recently claimed that inequality in society is a positive thing and his record on the rights of ethnic minorities is appalling. Therefore, any influence that he will have on northern politics will most certainly not be in the area of promoting equality of opportunity or the protection of minorities' rights.

But all the efforts of our political opponents will not succeed in stopping the growth of Sinn Féin, any more than censorship, oppression, intimidation and assassination campaigns waged by our political enemies did. Sinn Féin will continue to drive both the political process and the Peace Process until we achieve the change that is required so that everyone in this country can live in a genuine peaceful society built on equality.

Although no election result can be taken for granted, I believe that Sinn Féin will come back after the Westminster and local government elections buoyed by an increased mandate in the form of more MPs and more councillors. We will use that mandate to ensure that the Good Friday Agreement is delivered in its entirety and that the all-Ireland aspects are both strengthened and expanded.

Sinn Féin presently provides an unrivalled advice service for the people in the constituencies in which we have a presence, with full time constituency offices, and we offer effective political representation at all levels. No other party provides this level of service and we are always striving to increase and perfect the services that we provide. For all these reasons I am confident that the people will once more endorse the Sinn Féin candidates in greater numbers.

If the sudden interest of the PDs, Fine Gael, Labour and Fianna Fáil in this election is an indication that they intend to stay involved and develop all-Ireland politics, then I welcome it and I challenge them to organise on an all-Ireland basis and to contest elections here in their own right. By doing so it may help to validate what to date has only been rhetorical claims to be united Ireland parties. It says a lot for these politicians that they can take time out of their schedules to try and influence the outcome of an election but in over three years of daily sittings of the Bloody Sunday Inquiry, not one of them could find the time to attend in solidarity with the families for even one day.