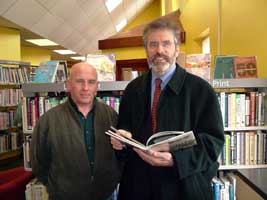 Gerry Adams with James McKeown in Carnlough Library, which the party is campaigning to save from closure

As part of his tour through North Antrim, Gerry Adams visited Carnlough, where he met up with the party's candidate for East Antrim, James McKeown.

McKeown a Larne man living in Carnlough, is also standing for Larne District Council. He described what lies ahead of him if he is elected on 5 May.

"Larne Council is a bearpit of loyalist sectarianism and the town itself has a reputation for its sectarian violence against nationalists, so it will be no easy task to win a seat. Having said that, the trend in the nationalist vote from the SDLP to Sinn Féin, if it is repeated in Larne, should give Sinn Féin its first seat on the council.

"In June 2001 our candidate took 4% of the vote, which reflects the steady increase in the Sinn Féin vote over the last number of years."