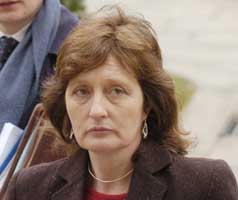 The widow of murdered Belfast solicitor Pat Finucane has written to every senior judicial figure in England, Wales and Scotland asking them not to sit on an inquiry into her husband's 1989 killing.

Geraldine Finucane wrote personally to every senior judge in Britain asking them to refuse to accept any appointment to sit on an inquiry and to reject the controversial new Inquiries Act.

Under the act, which became law after being pushed through by the British Government last week, ministers have the right to decide if some evidence can be heard behind closed doors.

Despite pressing for a public inquiry for years, Finucane believes the terms of the Act could prevent the truth of her husband's killing in 1989, and allegations of British involvement in colluding with loyalist paramilitaries in the killing, coming out.

In her letter, Geraldine Finucane said: "In view of these considerations, I write to request that if approached to serve on an Inquiries Act inquiry into my husband's murder, you, like Lord Saville and Judge Cory, refuse to accept such an appointment."

The Finucane family have said they will not cooperate with the inquiry into the solicitor's killing under the new legislation.

Public inquiries into the deaths of Pat Finucane and three other people were recommended by retired Canadian High Court Judge Peter Cory in 2002, in which he said there was strong evidence of collusion.

NIO minister Paul Murphy warned that some of the evidence would have to be heard in private due to security concerns, but Cory said the Act would make a "meaningful inquiry impossible" and advised other Canadian judges not to sit on such an inquiry into the solicitor's death.

Finucane said she felt she should make judges very aware of what was happening.

"The best way to sum up the Inquiries Act is that the word public does not appear in the title," said Finucane.

Government has no confidence in British Inquiries Act

Responding to a Dáil Question from Sinn Féin's Caoimhghín Ó Caoláin on Wednesday, Bertie Ahern stated that the Dublin Government has no confidence in the Inquiries Act, one of the last pieces of legislation passed by the British Government before the Westminster parliament was dissolved for the General Election.

"Can the Taoiseach confirm that he raised with the British Prime Minister Tony Blair the total unacceptability of this Act to the Irish people?" asked Ó Caoláin. He said the Act "would allow a British Minister to effectively gag an inquiry and is designed to prevent any real inquiries into the murder of Pat Finucane and others as a result of collusion". He pointed out that Judge Peter Cory has stated that the Act "would make a meaningful inquiry impossible" and would create "an intolerable Alice in Wonderland situation".

Ó Caolain asked the Taoiseach to echo the call of the Finucane family to every senior judge in Britain not to serve on any inquiry established under the Act.

While the Taoiseach did not make that call, he stated that his government had raised objections to the Act with the British but only some of their proposed amendments had been adopted. He said they did not have confidence in the Act as now passed.