Voting for the future 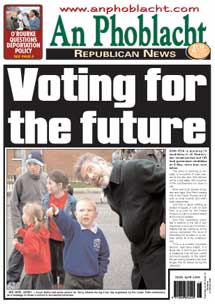 Sinn Féin is standing 18 candidates in all Westminster constituencies and 183 local government candidates on 5 May, more than ever before.

The party is seeking to win seats on a number of local councils for the first time. This election will be a real battle, with a number of the constituencies too close to call.

More and more people recognise and value Sinn Féin's leading role in the Peace Process and its work on local councils and within local communities.

Sinn Féin candidates report that in addition to the raft of very important social and economic matters that are coming up on the various canvasses, the issue of rebuilding the process is a constant across all of the constituencies.

"This is a crucially important election," says Gerry Adams. "It is about who is best to give the kind of leadership that will end conflict and build equality on this island. We are looking forward to the challenges that lie ahead during the campaign."