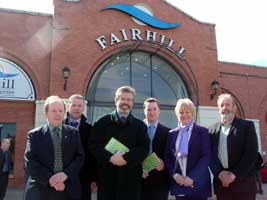 THE sun shone on Sinn Féin last Friday when the party president, Gerry Adams, toured the North Antrim constituency with Philip McGuigan, candidate in the upcoming Westminster election, and the party's hopefuls for Moyle, Ballymena and Ballymoney Councils.

And if the bright warm sunshine of Friday, which cut through the heavy rain and cold of the last week, reflects the voters mood, then Sinn Féin will be confirmed as the main nationalist party in Paisley-dominated North Antrim.

Indeed, the first stop on Friday's campaign tour was Ballymena, the heart of the North's so-called bible belt, with a visit to the Fairhill Shopping Centre.

In the shadow of Ballymena's All Saints Catholic church, as the Sinn Féin entourage made its way to Fairhill, the 'Big Man' — Gerry that is, not Ian — was met with warm smiles from shoppers and a few curious looks from drivers. One man, with a look of disbelief on his face, seemed to be tossing about in his head whether or not it was his duty for 'God and Ulster' to shout abuse. In the end he walked away shaking his head, probably wondering what the unionist world has come to when large groups of Shinners can walk around Ballymena unhindered.

At the doors of the shopping centre, Helen McGlinchey chatted with the Sinn Féin President and promised her support for the party in both the Westminster and local government elections on 5 May.

With four candidates standing for Ballymena council, where the party is not represented, Sinn Féin expects to return at least one councillor.

From Ballymena, the Sinn Féin convoy motored off through the rich green countryside that is rich in the history of the United Irish rebellion of 1798 towards Cargin, in the picturesque Glenravel, and a meeting with Mary Ellen 'Ellie' Clewly. At 105, Ellie, born on 14 March 1900, is the party's eldest voter and has always voted Sinn Féin because she "wants to see a united Ireland".

One of ten children born to Maggie and Robert Gribbens, two of Ellie's brothers served in the IRA in the 1920s.

As Adams and Philip McGuigan had tea with Ellie, neighbours from around the little estate waited outside with Laurence O'Neill, who is standing in the area for Ballymena's Braid ward, to greet the Sinn Féin president.

The next stop in the North Antrim tour was Waterfoot and the nearby village of Cushendall.

In Waterfoot, the Sinn Féin entourage visited the newly-opened Indian restaurant, where the new owners were happy to welcome the candidates, then on to Cushendall where they called in to the Central Bar, owned by Moyle candidate Oliver McMullan.

Next door, in the pub owned by Antrim hurling great Terence 'Sambo' McNaughton, the walls, adorned with hurling memorabilia and photos of hurling action, had on display a signed photo of the Sinn Féin leader in one of his greatest sporting moments. A poc fada devotee, the photo captured Adams in one of those rare moments when he actually got camán on sliotar, sending it 20 or so metres through the air.

At Glenann Primary School, one of the smallest in County Antrim, head teacher Moira McMullan proudly displayed the photograph of Martin McGuinness and pupil Sarah Delargey when, as Education Minister, the Sinn Féin man paid a visit.

"We'll get a photo of you and Gerry and make Martin jealous," suggested the An Phoblacht photographer. Both duly agreed.

In conversation with Philip McGuigan, Ms McMullan praised McGuinness for his commitment, as education minister, to rural schools, compared to the lamentable record of the present Direct Rule Minister Barry Gardiner.

"The lack of support for rural communities from those Direct Rule ministers based in the NIO means that young people can't afford to buy homes in the area," she said. "They move out, the numbers in the schools decrease and the NIO then use this decrease to justify cuts in funding to the schools. It is a vicious circle that needs to be broken and that can only be done, in the short term, through establishing a local administration".

From Glenann Primary School, outside Cushendall, the entourage moved to Ballycastle for the formal launch of Philip McGuigan's North Antrim candidature and those of the local government candidates.

Speaking to the large crowd that packed into the Antrim Arms hotel, Adams spoke of the importance of the elections.

He reminded his audience of North Antrim's proud republican history, dating back to the United Irish rebellion of 1798.

"In the face of the present campaign of vilification being directed at Sinn Féin it is crucial that we ensure that on 5 May we increase our vote, increase our representation on the three councils in the area Moyle, Ballymoney and Ballymena and install Philip McGuigan as the main nationalist challenger to the DUP in North Antrim," he said.

As the convoy made its way to Loughguile through the rolling hills and winding roads of North Antrim for the last visit of the day, the feeling among the Sinn Féin politicians was that the day had given a boost to those activists on the ground whose hard work and commitment will deliver the votes and seats that will make Sinn Féin the dominant nationalist party in North Antrim.