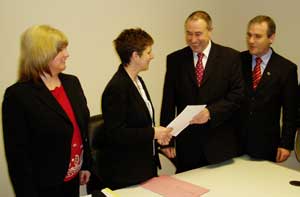 The last few months have been anything but quiet for Mitchel McLaughlin.

In March, he announced that he was finishing up as National Chairperson of Sinn Féin, a post he held for almost 20 years, and was taking over the role of General Secretary.

And at the same time as he was agreeing to take on the new role, campaigning for the Westminster elections, which he is contesting in Foyle, began in earnest.

In addition, Mitchel just happens to be based in possibly the hardest-fought and most closely watched contest of the upcoming poll as a result of John Hume retiring from the seat after the last election. Sinn Féin hopes to take Hume's seat from the SDLP's Mark Durkan and the electoral pundits are interested.

When I caught up with Mitchel on Tuesday, he admitted his time is at a premium lately.

"Taking on the General Secretary job was a big commitment, but obviously the northern elections are having an effect on my time," the Derry man, who currently represents Foyle as an MLA, says. "I'm relying quite heavily on Ciarán Quinn, who is based in Dublin, to look after things in the General Secretary Department at the moment."

Mitchel decided to give up the role of chair about two years ago to let "some new blood in". At this year's Ard Fheis, Dublin MEP Mary Lou McDonald took on the role.

"I had it been at it long enough and it was time for new ideas and a fresh face," Mitchel says.

I asked him about the difference between the two jobs and whether he was finding his new role a challenge.

"Well, the Chairperson's role deals primarily with party development, organisational development, internal discipline and grievance procedures and so on," he says. "It's a difficult role but Mary Lou is more than capable of taking it on.

"The General Secretary deals more with external relations. As the party grows, so do our connections, both nationally and internationally. We now have an extensive network of contacts and that means exchanging information and following up on it. We are trying to get as many groups as we can talking about the peace process and it will be my role to foster that sort of communication and future relationships. There's a world of difference between the two jobs, but I'm finding this one very interesting and stimulating."

At the moment a General Secretary's department is being established to help Mitchel in his new role, which will also involve a lot of travelling. But he says this is something he's used to.

"As Chair I had to travel as and when it was required, so this is no different," he says.

For the moment though, his attention is very much focused on Foyle. I ask him how the campaign is going.

"Very well indeed," he answers. "Everyone is really interested to see if Durkan loses Hume's old seat. The unionists don't enter into the equation, because they only represent 25% of the Foyle electorate, so this is a nationalist battle."

Sinn Féin's popularity has been growing rapidly in the area, but some of Sinn Féin's detractors say Mitchel had more chance of taking the seat last November, before the Northern Bank robbery and the McCartney killing.

According to the man himself, those issues are not having as much of an effect on the ground as the media makes out.

"We've come across a myriad of issues during this campaign," he says. "As always, people are concerned about the bread and butter topics, like housing and the economy. But they're also asking about Gerry Adams' recent initiative. They're interested in how that situation will develop. People tell me its something positive and they are tired of all the negative campaigning they've come across from other parties. They realise that negativity doesn't represent the way forward, but we do."

With that being the case, I ask Mitchel if there is a realistic chance of him taking the Foyle seat.

"Absolutely," he replies. "The attacks from our opponents have galvanised our activists and supporters. That and the prospect of actually winning the seat has people feeling really positive. I've never seen an election where party workers and voters have been so motivated."

I ask whether unionists voting tactically for the SDLP to keep Sinn Féin out could put a spanner in the works.

"There's always a possibility of tactical voting," he says. "We have to be prepared for that happening and make sure we have enough votes to carry us through in spite of it."

Mitchel believes that Sinn Féin will increase its number of MPs across the North.

"Our current seats are consolidated and we face no challenge there," he says. "But the SDLP are being forced to defend their seats. Just look at South Down. Eddie McGrady had planned to retire, but when the SDLP saw that we were running Caitríona Ruane, they had to keep him going. And she is mounting a very strong challenge.

I ask whether a larger mandate resulting from this election will have an impact on negotiations afterwards.

"Of course," he says. "We have always known that the coalition of opposition to the radical politics of Sinn Féin are most concerned about the party's electoral advance. Their short-sightedness in that respect has meant we have missed chances of getting the peace process back on track. But all their work has come to nothing so far. Sinn Féin is still gaining votes. The Meath by-election showed that, when Joe Reilly increased his vote at a very difficult time for the party. And then we had Gráinne Mhic Géidigh taking the Údarás seat in Donegal. Our opponents hoped that after months of negative campaigning, we would be hit hard in the polls, but we weren't. They'll be getting the same message after the General Election."

Finally, I ask Mitchel if and when talks will resume post election.

"They will resume," he says. "When, is harder to say. It's our intention that they should resume immediately. That was the entire purpose of Gerry Adams taking that initiative. We know that if we remove the excuses our opponents use, it will become evident that fear of change is what really motivates them. They will continue to try and move the goalposts, and I think public opinion will not put up with that. But this election will really be a defining moment for Sinn Féin and the Peace Process, which has seen its fair share of ups and downs. Our opponents can resist change, but they can't stop it."