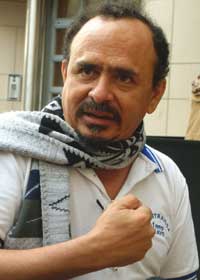 Ricardo Galindez wears the marks of his support for Venezuelan President Hugo Chavez on his hands, neck and chest. Broken bones and bullet holes are the right-wing opposition's imprints on the body of a man who happily declares that, apart from that and some headaches, the presidency of Chavez and the Bolivarian Revolution have brought hope and happiness to his life.

Galindez is a founder member of the new Venezuelan Workers' National Union (UNT), created as an alternative to the old CVT, which but he also works as advisor for other trade unions and was the editor of socialist journal El Topo Obrero for more than 20 years. He was in Ireland recently at the invitation of the Latin America Solidarity Centre to take part on a public meeting about the Bolivarian Revolution in Venezuela.

It seems everything has got a lot calmer in Venezuela after the recall referendum that reinforced Chavez's hold on his presidency. Would you describe how the current situation came about?

Once Chavez's government took control of the situation, they encouraged us to get organised and the Circulos Bolivarianos were formed. Hundreds of thousands of people got organised with the objective of defending the government against the looming threat of a new coup attempt. These groups were formed in neighbourhoods, housing states, secondary schools, etc, and in some cases, they demanded military training because, as we all know, a coup cannot be confronted with flowers and good will, you also need guns.

Meanwhile, the opposition, financed by US imperialism, took to the streets in preparation for the lockout which took place in December 2002. The employers wanted to create instability through shortages of food, petrol, etc, to provoke people to overthrow Chavez's Government, similar to what they did with the transport strike in Chile in 1973.

So, people did not react as the employers expected during the lockout. We adopted a strategy of passive resistance. In some cases, workers managed to re-open businesses and took control of the production. However, the key was when workers took responsibility for the opening and working of the oil refineries El Palito and Puerto la Cruz, which are vital to maintain oil and gas production for the internal market.

After their failure with the lockout, the opposition forced a teachers' strike. The people, organised in what we called educative communities, took to the schools and colleges and challenged the teachers to end the strike otherwise we would be taking over their role. Teachers had to come back to work.

So, after the defeat of the coup, the demonstrations, the lockout and the strike, they had to resort to legal means, using the recall referendum to try to legally overthrow Chavez. The opposition was forced to collect millions of signatures to get the referendum — we still maintain they did not get all signatures they should and we have evidence. However, the national government, through Chavez, put forward the idea of taking on the referendum as another political battle against the enemies of the revolution.

Six weeks after the referendum was called, over one million people got organised in so-called Electoral Battle Units. This was the first time that the people actively participated in an electoral process. The fact that Chavez got the support of nearly 60% of the voters was the final straw for the opposition. Demoralised, demobilised, divided, they disappeared from the streets.

However, they have not gone away. They are accepting the government so they can keep their businesses going while waiting for an opportunity to launch another coup attempt.

In what direction is the country going now?

What is going on in Venezuela is something similar to what happened in Cuba at the end of the 1950s. We have a government with an ideology that does not fall into place with the plans of corporations and/or the US Government and for that reason it has to be in some way displaced.

Last year Chavez denounced neo-liberal policies and three months later he denounced capitalism as the reason behind the problems in our country. He also opposes the Free Trade Agreement of the Americas (FTAA), which amounted to make of Latin America the back garden of the US economy and which has been now reduced to a series of bilateral agreements between some Latin American countries and the US, but without the presence of some of the main players in South America.

Chavez's commitment and struggle has served to raise awareness among our people.

Chavez's denunciations of capitalism initiated a debate among the political sectors, but also the grassroots movements. The question is what is the alternative to capitalism? Chavez pointed out that it is not possible to solve the problems that capitalism has created in Venezuela from a capitalist understanding, and that the only solution rests with socialism, but real socialism.

Why did you start a new national union?

Chavez's electoral victory was a victory for the Venezuelan people in general. Some union leaders realised there was an opportunity for a resurgence. In the new Constitution we could also see some interesting proposals for the union movement.

The existing CTV had become a tool of the government. Since 1959, there had been only one strike against the government. That was in 1979 and the reason was a wage increase. So, the union decided its strategies according to the government, ignoring the needs of its affiliates.

There was an internal debate as to whether we should stay within the existing CTV and try to change its ways or create a new organisation. After two years of discussions we were forced to create a new union, the UNT.

This new trade union has not the same dependant relationship with the government that the CTV had. When workers go on strike against decisions taken by a minister or against an employer, they always clarify their support for Chavez's government, so they will not be mistaken for those supporting the opposition. Our grassroots social and labour awareness has increased and some of the leaders of the new union are being displaced from power through the union elections taking place at the moment because they failed to fulfil their promises. This demonstrates that our affiliates will not allow us to become cosy allies with the government. We still have huge problems relating to low wages, unemployment, job security, working conditions, etc. We do not deny that the new government has brought many improvements to the situation of the working class but there are many things that we have to improve. Key to those benefits was how Chavez has helped to raise political awareness among workers, destroying the CTV.

What lessons can be learned from Venezuela's revolution?

The fight against imperialism, for the independence of governments and respect for the people's decisions is not only for Venezuelans. If today we win this fight against imperialism, we will be encouraging many people, showing them there is an alternative and that it is possible to defeat the monster of US, British and Spanish multinationals who are invading our countries. It will help European and American people to fight for their own rights, which have been extinguished by multinationals. That is why we say that to be in solidarity with Venezuela's process is to show solidarity with yourselves.