Remove the mote from your own eye 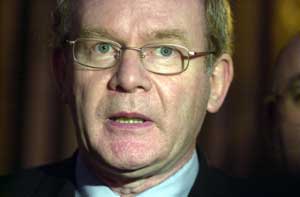 30 January has been a significant date in the republican and nationalist calendar for the past 33 years. It was Bloody Sunday in Derry. The events of that day will be indelibly imprinted in the memory of every Derry citizen. The families and their supporters from many corners of the world march every year demanding truth and justice for the families who lost loved ones on that day. Sinn Féin was to the fore in organising the Annual Commemoration March in memory of the Bloody Sunday dead until the families felt it was time for them to take control of it. We then moved into a supportive role and have taken our lead from the families ever since. And we will continue in that support until justice and truth is secured. It is now organised by the Bloody Sunday Weekend Committee that is made up of interested parties from across the human rights spectrum.

30 January will now also be a significant date for the McCartney family from the Short Strand in Belfast for the rest of their lives, but for very different reasons. Because it was on 30 January this year that they lost their brother in a brutal stabbing outside a Belfast bar. But although this date will take on a particular significance for the McCartney family and Bridgeen Hagans and her two children, the events leading up to and including the murder of their brother and partner, Robert, will have a less than honourable significance for the republican community. A small number of republicans and, I am saddened to say, including some IRA Volunteers, on that day besmirched the name of Irish republicanism by becoming embroiled in a sequence of events that resulted in the brutal murder of Robert McCartney.

Now while people are entitled to criticise aspects of how this situation was handled by Sinn Féin, I believe that we at all times acted with sensitivity towards the McCartney family. While the media and our political opponents were taking great glee from Sinn Féin's discomfiture, our activists on the ground and out of the glare of the media were working diligently to find out the truth of what occurred.

Contrary to popular media spin and in contrast to those politicians that were using this tragedy as a political football, as Sinn Féin became aware of the facts we immediately made our position clear and advised anyone with information to make it available through any channels with which they were comfortable.

If that was directly to the PSNI then they were assured that they could do so without fear but if people felt incapable of going directly to the PSNI, and there are many legitimate reasons why people would feel that they cannot do so, then we said they should make the information available through a third party such as a solicitor.

And of course this advice was criticised by SDLP spokesperson Alban Magennis, a barrister who should have known better and been aware that the PSNI itself had set the precedent for this procedure in the Seán Browne re-investigation in my constituency of Mid-Ulster, when they advised those that felt they could not come forward to the PSNI to give their evidence to a named firm of solicitors or the Pat Finucane Centre. This alternative avenue of providing information has been accepted by the McCartney family and the PSNI

Sinn Féin has made the party's position clear: no person with any information that can bring justice and truth to the McCartney family should withhold that information. The IRA has made its position clear also: it will not give shelter to those responsible or countenance any action that could be perceived as a cover-up of the full facts surrounding the murder of Robert McCartney.

Although the media and political commentators focused on one aspect of last week's IRA statement, those interested in the full facts should take time to read the statement in full.

I totally disagree with the offer by the IRA to 'shoot' those directly responsible for Robert McCartney's murder. It was wrong, it was a mistake and I am glad that it did not happen but the rest of the content of the statement should not be lost in the welter of publicity generated by a media hungry for another lurid headline. What is important about the statement is the fact that it states unambiguously that the IRA will not shelter or cover up anything in order to protect those responsible for this dastardly act. There will be no comfort afforded them in the republican family.

I wish that some of those that are most vocal in their attacks on Sinn Féin and our handling of these tragic events would apply the same standards and demands to themselves in all circumstances. Can Hugh Orde tell the people of Ireland that he does not know the names of those members of the former RUC who directed and colluded with the unionist murder gangs that killed hundreds of Catholics, nationalists and republicans, including human rights lawyers Pat Finucane and Rosemary Nelson?

How many of them have been expelled from his organisation?

If he doesn't know, why not? After all, he spent 13 years working with John Stevens, who claims to know all of their names. If he does know, will he provide their names to the victims' loved ones to enable them to pursue truth and justice?

Can he assure the people of Ireland that these culprits are not now serving, possibly in senior ranks of the PSNI?

Did Denis Bradley, as Deputy Chair of the Policing Board, have access to the full contents of the Stevens Report on collusion? If so, he must know if those RUC personnel involved in collusion are now serving members of the PSNI. Can Denis Bradley assure us that that they are not?

If Denis Bradley did not have full access to the Stevens Report, why did he not demand access to it in its entirety?

And we know for certain that the British Secretary of State and British Prime Minister are privy to a mountain of information of pertinence to the Bloody Sunday Inquiry and the Barron Inquiry into the Dublin and Monaghan bombings and other murders by British state forces. Will they now do the honourable thing and release all of this information so that the families can finally, after more than 30 years, gain closure on their grief and suffering?

Perhaps all of the aforementioned could speak with a little more credibility if they practiced what they preach.

Finally, on a brighter note, I would like to congratulate my colleague Joe Reilly on his tremendous showing in the Meath by-election. Despite the combined efforts by all of the political opponents of Sinn Féin and a hostile media, Joe increased the Sinn Féin vote by 3% in Friday's by-election, beating both the Labour and Progressive Democrats candidates.